The CAMS-04 Wuxia is a mobile suit featured in the Gundam Reconguista in G anime series.

A new mass production MS belonging to the Capital Army. It exhibits high maneuverability due to its light weight and high thrust of the space backpack. Armed with beam vulcans on the arms, beam rifle in the right hand, and beam claws at the tip of the legs.

The Wuxia's most notable action would be from it's most notable pilot, Becker Shadam, confronting the G-Self Torque Pack and the G-Arcane. Despite Becker's greater experience as a mobile suit pilot, the G-Self's Torque Pack was so overpowering, that a single punch from it resulted in Becker's Wuxia buried head-first in a quicksand pit, resulting in his death.

After this, the Wuxia would continue to serve the Capital Army throughout the conflict to its conclusion. 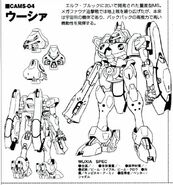 Retrieved from "https://gundam.fandom.com/wiki/CAMS-04_Wuxia?oldid=476495"
Community content is available under CC-BY-SA unless otherwise noted.