The Catsith is the first full-scale combat mobile suit developed by Capital Army. In the intercontinental war between Ameria and Gondwan, the military power of the two countries expanded rapidly, and along with that, Rose of Hermes blueprints permeated each country and mobile suits began to be developed and deployed. Against this situation, even Capital Army had to deploy armed mobile suits as a deterrent, and this machine was suddenly developed.

It has a structure specialized in air combat for the purpose of combating the recent military expansion. Therefore, high maneuverability in the air and long-range cruising ability are essential, and special attention is paid to wing design and balance adjustment. Various equipment such as shields and missile pods can be mounted on the expansion arm via two general-purpose connectors provided on the backpack. Also, the head sensor is covered with tempered glass, and when it starts up, it lights up sequentially from the left. The wings of the backpack can be attached and removed. Also, the backpack can be replaced with a space backpack. 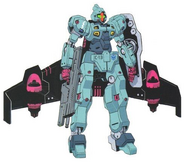 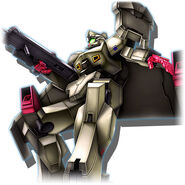 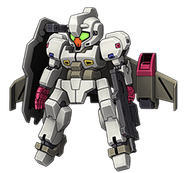 Retrieved from "https://gundam.fandom.com/wiki/CAMS-02_Catsith?oldid=476351"
Community content is available under CC-BY-SA unless otherwise noted.