This aircraft is a late-model Medea transport that was deployed at the end of the One Year War. It is powered by more powerful jet engines, and its aerodynamically improved shape has greatly improved its stability in the air and flight speed. On the other hand, since the fuselage and container were designed as an integrated unit, the cargo capacity was somewhat reduced. However, it is still a transport aircraft with a huge payload, and it still has the advantage of being a VTOL aircraft that can take off and land on uneven terrain without runways, so it has been deployed to various bases on Earth and continues to carry out the mission of transporting supplies for the Earth Federation Forces even after the end of the One Year War. There were also aircraft that were refurbished and operated as VIP transporters, and aircraft that were equipped with equipment and mobile suits necessary for mission execution and operated as mother ships for special forces.

Several units are present at the Federation's Arctic base when it is attacked by the Zeon's special forces Cyclops Team in late U.C. 0079. One unit was also operated by the penal battalion "Slave Wraith", and painted in their team custom colors. In U.C. 0083 several are used to transport pilots and mobile suits to the Torrington Base after Anavel Gato's theft of the prototype RX-78GP02A Gundam "Physalis".

In War in the Pocket 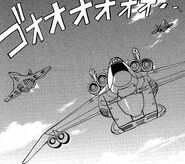