He was one of the two MS-09R Rick Dom pilots, under the command of Char Aznable. He and his unnamed partner were ordered to serve as a backup for Lalah Sune, who was attacking a Federation Fleet as a part of her practice. But, Butsham and his partner refused to attack the Fleet, due to not wanting to in danger themselves. Later, he and his partner were reprimanded by Char Aznable for their insubordination. When asked to explain themselves, Butsham replied that they didn't want to risk their lives, because common soldiers such as themselves had little use, referring to Lalah's Newtype abilities. Butsham later admitted he was jealous, and agreed with his court martial, but nevertheless asked to fight behind Lalah's MAN-08 Elmeth. Char asked Lalah what she thought of it; she agreed, and thus so did Char. In the battle of the 41st episode of the TV series, the mothership Zanzibar was sunk, and Lalah, whom he once escorted, was killed in action. Since Char was the only one who survived, Butsham is also considered to have been killed in action. 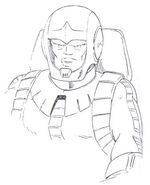