The Bulldog is a combat vehicle of the Earth Alliance. It was first introduced in the TV anime Mobile Suit Gundam SEED.

A combat vehicle equipped with anti-MS missiles. The front bumper is equipped with jacks to secure the vehicle, and the missiles on board are infrared tracking missiles. The missiles are accurate, but have a short effective range and low firepower. In addition, because of the low performance and weak durability of the vehicle, it could only serve as a deterrent in MS combat.

Several of these vehicles were stationed at Heliopolis during the EA's and Orb Union's partnership in the development of the G Project. When ZAFT invaded the colony, they were deployed to counter them. However, all were destroyed by two ZGMF-1017 GINN mobile suits.[1]

Many were stationed at Earth Alliance Headquarters in JOSH-A, and participated in the ZAFT attack known as, Operation Spitbreak. They would prove to be ineffective against the massive ZAFT invasion force and all would be destroyed when JOSH-A's Cyclops System was activated.[2] 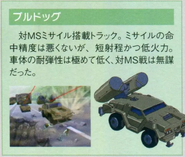