Space Fortress Bulge (宇宙要塞バルジ Uchuu Yousei Baruji, aka Space Fortress Barge in the English dub) is a space mobile fortress used by the Organization of the Zodiac in the anime series Mobile Suit Gundam Wing.

Bulge was one of OZ's space fortresses, it was by far the largest mobile space vehicle in the After Colony timeline. At 8 kilometers in length it was more than twice the length of the space battleship Libra. Bulge was likely large enough to be considered a space colony not only due to its size but also due to its similar shape and appearance. The massive, disc-shaped gravity block generates artificial gravity, and an agricultural plant allows the fortress to become self-sufficient

Its primary purpose was to serve as OZ's command center in space. The large beam cannons were perfect for assaults to destroy other large objects such as space fortresses and colonies.

Two large beam cannons serve as the primary weapon of the space fortress. They are powerful enough to destroy a colony's power systems at long range. However, they are fixed in place and cannot be turned. In order to aim them, the entire fortress has to be maneuvered.

The massive beam cannon simply known as "Bulge Cannon" was retrofitted onto the station by OZ. It is connected directly to the station's power block, and has enough power to destroy a space colony with a single shot.

Bulge was designed by OZ engineer Seis Clark and completed in Summer of AC 186. Its name 'Bulge', meant to imply an 'excess', was a moniker it gained from the colonists working to build it, as its construction caused considerable financial and political strain on the people of the colonies. During the fortress's inaugural party, a group of colonist rebels launched an attack in which Seis Clark and his wife, Aoi Clark, perished. Aoi's young son, who would go on to become Heero Yuy, was rescued from the battle by Odin Lowe. In this same battle, Zechs Merquise and Elve Onegell, cadets of Treize Khushrenada, were also believed to have perished, however both resurfaced years later.

Bulge served as a base for the United Earth Sphere Alliance Space Force until the year AC 195, when it was seized by an OZ task force led by OZ lieutenant Trant Clark (brother of Seis Clark), whose knowledge of Bulge's design allowed Sedici to infiltrate it and cut off the main circuit of the beam cannons, allowing OZ to take it without a fight.[1]

Following White Fang's takeover of OZ's lunar base and the still incomplete Libra, Bulge became OZ's last bastion in space. In response, the OZ space force upgraded the space fortress, removing the space port in the front and adding a powerful new beam cannon that draws power directly from the fortress' power block. This new weapon was simply known as "Bulge Cannon".[2]

The White Fang later used their newly acquired Virgo II mobile dolls to launch an attack against all remaining OZ forces in space, including Bulge. The space fortress's defenders were composed of Taurus mobile suits, which made use of obsolete laser rifles that could bypass the Virgo's planet defensors. The Taurus bought enough time for Bulge to fire its main cannon at 80% output, destroying much of the White Fang forces, including White Fang officer Sedici's ship. However, the battle ultimately ended with White Fang's victory when Bulge was destroyed by Gundam Epyon while charging for another shot.

Bulge is first seen in episode 10 of Gundam Wing during the battle between OZ and four of the five Gundams at OZ's base in Siberia. Lady Une set up the encounter as the conflict which would finally see the end of the Gundams. Zechs Merquise (in the Tallgeese) does battle with Heero Yuy (in the Wing Gundam) for the first time. But when Lady Une’s plan starts to fail, she contacts the pilots and threatens to attack the colonies with Bulge and its missiles, if the pilots don’t surrender and give up their suits. This prompts Doctor J to contact Lady Une to declare his surrender as he does not want his actions against OZ to hurt the colonies. Heero self-detonates his Gundam, nearly killing himself. The three other Gundams present retreat with Zechs refusing to fight when the Gundams are in this compromised position. This event is one of the aspects to Lady Une developing a split personality disorder as she struggles to follow her superior and love interest, Treize’s ideals.

Bulge next main appearance in the series is during the conflict within the Romefeller Foundation as Tubarov Bilmon takes over the Lunar Base (episode 24/25). During the battle between Heero and Quatre Winner, Lady Une (on Bulge) attempts to contact Lunar Base to speak to the Gundam Doctors. But Tubarov disconnects all transmissions from Bulge. Lady Une, who has now realized Treize’s ideals, leads an assault on the Lunar base which is countered by Tubarovs’s mobile dolls. The mobile dolls attack Bulge, which was being used as a distraction so Lady Une could land on Lunar base and rescue the Doctors and Gundam pilots who were being killed by Tubarov by suffocating in their cells, where the Romefeller Chief had cut off the air supply. Lady Une releases the prisoners but is shot and nearly killed by Tubarov. Bulge survives the attack from the mobile dolls.

Bulge’s final appearance in the series is during episode 41. By this time, Milliardo Peacecraft has been appointed the leader of White Fang and declares war on Earth on behalf of the colonies. The White Fang and OZ battle above Earth as the Gundams are caught in the middle. This episode sees Bulge firing the Bulge Cannon for the first and only time. The personnel onboard Bulge ordered the main weapon to be fired to thin out White Fang’s forces but this proved to be incompetent as the powerful beam clipped one of the colonies. It was stated that if it had been a direct hit, the entire colony would have been destroyed. Despite almost making a huge mistake, the Bulge cannon was programmed to fire a second time in an attempt to wipe out the Gundams, who were also in the battle, once and for all. When the Gundam pilots noticed that Bulge was powering up again, they made their way over to the Space Fortress to stop it but they knew they wouldn’t make it in time. At this point, Milliardo, piloting the Gundam Epyon, races past the Gundams and with his beam sword at full power, cuts deep into Bulge which causes a chain reaction of explosions which react with the fully charged Bulge Cannon and blows up in a blinding explosion. 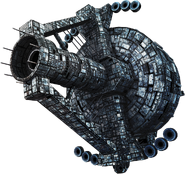