The Bug is an automated bit from the Mobile Suit Gundam F91 film.

The Bug is a disk-type automated anti-personnel weapon, that is another product of Iron Mask's secret Rafflesia Project. The Bugs were created to purge the Earth Sphere of its surplus population, exterminating human beings while causing minimal damage to buildings and natural environments. These machines are capable of detecting humans by their respiration, body heat, or motion, and can attack their prey inside confined spaces like buildings and emergency shelters by deploying 60-centimeter-wide Child Bugs. While their primary purpose is to target civilians, Bugs are also capable of destroying mobile suits, tanks, and other fighting vehicles.

They were secretly installed on a Zamouth Garr-class ship and used on Frontier I Colony inhabitants in March, UC 0123. Gillet Krueger claims the Bug units have the ability to "exterminate a Frontier population of 3,000,000 within two to three days". 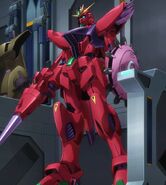 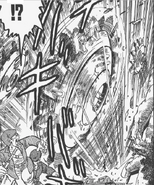 Retrieved from "https://gundam.fandom.com/wiki/Bug?oldid=440646"
Community content is available under CC-BY-SA unless otherwise noted.