The Bud Carrier is a transport capsule that appears in the TV anime Mobile Fighter G Gundam.

An mobile fighter transport device operated by Neo Japan. It looks like a lotus flower bud, and when the external armor corresponding to the petals is deployed, the mounted mobile fighter is revealed. It can also be operated like a sub-flight system. After descending to the ground, it was used as a base of operations for the Neo Japan team and sometimes as a temporary lodging for Domon Kasshu and Rain Mikamura.

The Bud Carrier was initially used by Domon and Rain to descend to Earth with the GF13-017NJ Shining Gundam at the start of the 13th Gundam Fight. After the Shining Gundam is badly damaged after a fight with the JDG-00X Devil Gundam in the Guiana Highlands, Neo Japan sends the GF13-017NJII God Gundam down to Earth using a Bud Carrier. Domon later attempted to use a Bud Carrier to reach the Neo Japan space colony as the Devil Gundam took over. However, this Bud Carrier was destroyed by Wong Yunfat and the Walter Gundam. 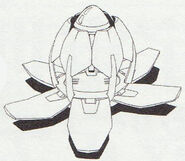