Bryn Sondheim (ブリュン・ソンドハイム, Buryun Sondohaimu?) is a fictional character in Mobile Suit Gundam 00I. Bryn is the Innovade son of Lars Grise.

An Innovade with the appearance of an 8 year old boy. When Bryn was captured, he was dressed to look like a doll-like female figure and was in a lethargic state.

Early in the story, Bryn was shot by Lars, but was saved by Telicyra. However, Bryn disappeared from Telicyra's sickroom. Bryn later reappears dressed as a young girl in gothic style attire in a gloomy room. While sitting in a chair, Bryn attempts to use his quantum brainwaves to communicate. He receives a response from Hallelujah Haptism, who is currently imprisoned by the Federation Forces. Hallelujah claims he is talking to him to pass time, but his brainwaves are cut off as Dr. Clay Lihichyte, creator of Team Trinity, extracted Bryn's blood.

Bryn cried for help using his quantum brainwaves, managing to reach Leif's and Telicyra's brains. Bryn's voice also managed to reach the Innovade hunter Lars. Relying on the voice, Leif and Telicyra struggled on to get to Bryn. Reaching the location of the voice, they were met with a doll-like figure of a girl, who was in a lethargic state because of the large amount of blood drawn from her. Dr. Clay then appears, and is asked by Leif where Bryn is. Dr. Clay reveals the one dressed up as a doll was Bryn. Dr. Clay then points a gun on the group, but Leif, being a combat type Innovade, quickly restrains Dr. Clay. Telicyra and Leif then move Bryn out of the place as he is unable to move his body due to his wound.

During a battle between Leif and the Innovade hunter Lars, Bryn attempted to stop the fight by contacting Lars via quantum brainwaves. At this time, Bryn informed Telicyra of the fact that Lars was his previous father.

After all six Innovades have been awakened, Bryn learns their true purpose is to become the new Celestial Being observers and to perfect Aeolia Schenberg plan that is to be accomplished through the help of three important parties: humans, Veda, and Innovades. When Regene Regetta decides to eliminate the other five comrades in pursue of his own goals, Telicyra, Leif, Lars and Bryn agreed to remove him from the group, triggering Hermiya's ability and causing Regene to lost all memories related to the six comrades and his awakened ability. In the epilogue, Telicyra, Sulu, Hermiya, and Bryn are now living together. 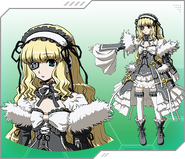 Bryn disguised as a doll