Brave Cod (ブレイブ・コッド, Bureibu koddo?) is a character from the Gundam Sentinel photo-novel. He was responsible for inciting the Pezun Rebellion, and was the leader of the New Desides.

An experienced veteran of the One Year War, he was known as a "warrior" by his colleagues. Brave displayed extraordinary skill as a mobile suit pilot, and because of this, he was rumored to be a Newtype. In reality, however, this was due to the intense training he has undergone to condition his mind and body to resist the suicidal high G forces and maneuvers that accompanied his combat style. During the war he was even given command of a warship by Brian Aeno. During the period shortly following the Gryps Conflict, Brave Cod commanded an Earth Federation Space Force Hizack squadron. He was stationed at Pezun and desperately wanted to return to Earth or even the moon. He complained bitterly about the lack of women in space to his commanding officer, Commander Pad, who himself was sick of space and glad to be at last returning to his wife after five years.

Cod maintains his station at Pezun for two years after the departure of Commander Pad. At this point he uses his charisma and military leadership allow him to rouse the Titans-pro officers at the asteroid fortress Pezun into forming the New Desides, a group who swear to fight for the ideology of Earthnoid supremacy. He uses the assistance of Tosh Cray in order to set up the Logistic Bomb, by planting faulty data and sabotaged programing in the data retrieved by the last loyal officers returning to Earth.

When Task Force Alpha assaults Pezun he has the short-sightedness to believe that it is impossible for the Federation to create a mobile suit that is both fast and powerful. The S Gundam proves him wrong. After the withdrawal from Pezun, Cod realizes quickly that the enemy MS that had been moving to suppress Pezun, had returned to their ships instead and that the plan to lure the advancing Task Force Alpha mobile suits there and wipe out many of them with its explosion had failed. Despite Cray's words that destroying Pezun would have no meaning Cod insists, “No. It’s not meaningless. Such an act will display our ideology to the world.”

As New Desides closes on the moon, Cod begins to grow restless to sortie in a mobile suit. He believes that New Desides can win with strategy and suppress the moon, he is greatly heartened to hear that Aeno's fleet has defected and joined his cause. As New Desides' fleet is engaged by Task Force Alpha Cod gets his wish and sorties in the new ORX-013 Gundam Mk-V. His assault tears through the Federation forces as he praises the Mark V and the suits newly designed Incom System. After this initial battle he returns to the New Desides flagship Killamanjaro. The ship is critically damaged by the Federation and he interprets the order to abandon ship as an opportunity to re-engage in his Gundam MK V.

Cod engages Task Force Alpha's FAZZ squadron. He pulls an insane maneuver typical of his combat style and evades a FAZZ missile attack that causes him to lose a tooth. His own missiles are jarred into firing by the concussions from the FAZZ's and his incom in destroyed. Cod uses the two beam sabers as rifles to shot a dual beam attack (in the style of the ZZ Gundam) and then charges in and kills FAZZ pilot John Grissom. The pilots of the other two FAZZs then retreat, however he catches up to Robert Aldrin and bisects him with his beam saber. He attacks Shin Crypt as well and destroys his FAZZ, however Crypt survives by ejecting. He is engaged and damaged by an enraged Ryou Roots and his suit is damaged, but he damages Ryou's as well. Speeding across the moon he demoralizes and annihilates the 143 squadron as Tosh Cray's White Squadron rejoices at his stunning victories. His battle ends as he lands in Ayers City and goes to see its mayor, Kaiser Pinefield.

As New Desides reaches the point where Ayers City is also lost he again sorties in his Gundam Mk V with a partially functional Incom system. While disappointed that the system is not repaired he is grateful to hear that a new missile system has been installed on it. He launches and secures Ayers City's mass driver along with Josh Offshore. From here he pushes forward, leading a squadron consisting of Xeku Einses,Xeku Zweis and Zakus that have been customized by the militia of Ayers City.

Seeing one of the White Squadron mobile suits destroyed by the Ex-S Gundam and its accompanying Ζeta Pluses, he tells Offshore to handle the Z Pluses using his Incom system to cause the two Z Pluses to scatter one way and the Ex-S Gundam another. He pursues Ryou intending to finish their battle. His knees open and deploy reflector Incoms, however he does not manage to use them. An attack launched by Ryou glances and partially melts his Gundam's leg. He counters an charges and a shot from his Incoms destroys Ryou's Beam Smart gun. Cod tempers the attacks of the Incoms that could fail at any time by launching a series of shots from his beam rifle. At last he scores a hit on the Ex-S Gundam's back, but it results only in a partial melting of its armor. Cod manages to disable Ryou's own Incom by hitting it with the recently installed micro-missile pod pellets. He believes that Ryou's broad array of armament is compensating for his lack of skills. Using the ball pellets of the micro-missiles as cover, Cod lands on the moon, then leaps up, grabs the Ex-S Gundam's two waist cannons and simultaneously kicks it in the chest, however ALICE uses this to her advantage and jettisons the Ex-S Gundam's waist cannons. The two Gundams collapse to the ground, Cod recovers and draws his beam saber yelling about Ryou being a Newtype, but lacking skills. He charges the Ex-S Gundam with his beam saber, however ALICE deftly blocks and counters with her own. The text describes the Gundam Mk V's chest as being impaled by the beam saber, while the accompanying picture makes it appear more like a slash, either way the attack kills Brave Cod, his final words are: "Finally... I can return... to Earth..."

Brave Cod as shown in the prologue of Gundam Sentinel. 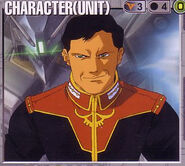 Retrieved from "https://gundam.fandom.com/wiki/Brave_Cod?oldid=434163"
Community content is available under CC-BY-SA unless otherwise noted.