Bosch (ボッシュ) is a character in the manga Mobile Suit Gundam F90.

During the Second Neo Zeon War, Bosch was a Federation pilot and was one of the Jegan pilots who helped Amuro Ray and the ν Gundam push back the Axis. After seeing the light of the Axis Shock, he became obsessed with the power of the Gundam and sought to obtain it for himself. In order to do so, he secretly joined Mars Zeon, a group of Zeon remnants.

In U.C. 0120, Bosch, now a lieutenant, became the leader of the Federation's 13th Experimental Battle Group, which was responsible for testing SNRI's F90 Gundam F90. The team consisted of SNRI test pilots Def Stallion and Sid Amber, as well as Federation pilot Navi.

During a routine test, the F90 Unit 2 was captured by Mars Zeon using Mobile Suits that resembled One Year War era Zeon Mobile Suits. In response to the incident, the Federation reorganized the 13th Experimental Battle Group into the 13th Independent Mobile Fleet and ordered them to head to Mars, to recover the F90 and destroy the Zeon remnants.

On the way to Mars, Bosch leaked the location of the fleet to Mars Zeon, allowing them to hit the flagship, Admiral Tianem, with an orbital mine. While the damage caused by the mine was negligible, it delayed the fleet's flight schedule, meaning that they would not be able to meet the unmanned supplied ships as planned on the return trip. It was at this point that Navi realized that there was a traitor onboard, since the chances of being hit by a single stray mine was 1 in 256 trillion.

When the fleet finally arrived at Mars, it quickly came under attack by Mars Zeon forces. At this point, Bosch finally revealed his true nature and took over the Admiral Tianem's bridge with a group of Mars Zeon soldiers. Bosch ordered the Admiral Tianem to fire on the other ships in the 13th, destroying two of them. However, one of the destroyed ships crashes into Phobos, sending rock fragments everywhere. With the situation in space descending into chaos, Bosch and his men escaped to Mars using the ship's escape shuttles.

In the Mars Zeon base, Bosch revealed himself to Navi before boarding the Mars Zeon F90, a modified version of the captured F90 Unit 2. Using the modified Gundam, he destroyed Sid's Geara Doga Kai before confronting Def in his Full Equipment F90. During the battle, he explained his own motives and told Def that everything he thought he accomplished with his own skills was actually the work of his F90's simulated personality A.R..

During the battle, Bosch destroyed the head of Def's F90. However, Def, in a move mirroring the final fate of the RX-78-2 Gundam, lifted up his beam rifle and destroyed the Mars Zeon F90 with a single shot, instantly killing him. 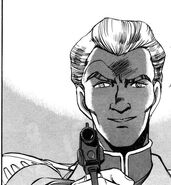