Bork used to be a fighter pilot, but due to his insubordinate attitude towards his superiors, he was transferred to a base in the Gobi Desert. He is a man of flexible ideas, such as advising his superiors to use the Gundam Pixy that was being transported in response to an attack by Zeon forces. He also takes the initiative to stand on the front lines and is trusted by his subordinates. When they realize that they are surrounded by Zeon, they compare this to the Alamo (battle). He pilots the Pixy, which he has been given permission to use, and repels several attacks by Zeon forces. In the end, he and Pixy are abandoned at the base and engage in a one-on-one battle with Henry Boone of the Zeon Army. The game has multiple endings, and the ending changes depending on whether the player wins or loses the final battle.

If the player wins, Bork will help Saki Graham of the Zeon Army because of the wonderful warrior he just met, and return to the deserted base to treat her. In the "Side Stories" remake, Bork always wins, and though he survives alone, he collapses, shouting, "What the hell is this battle for? Later, near the base, a Federation recovery team discovers the Gundam Pixy with its lower half buried in the sand, but there is no mention of a pilot. 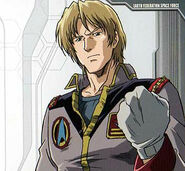