The Bloody Mary (or Devil Gundam "Bloody Mary") is a gigantic Mobile Weapon from the Plamo-Kyoshiro series. It also appears as a Gundam Fix Figuration design.

Despite its name, the Bloody Mary is actually a modified Gundam plamo with four arms. It is made with latex, FRP plastic, and glass fiber. The head is actually just a helmet, its real head is that of a grotesque-looking alien face with extendable jaws. This implies that it is not truly a mobile suit, but an alien being wearing powered mechanized armor.

The Bloody Mary has a set of extending, pharyngeal jaws (similar to those on the Xenomorph of Alien fame) which spit latex at opposing plamos.

The unit first appeared in Plamo-Kyoshiro, the first non-Universal Century Gundam, in other media. 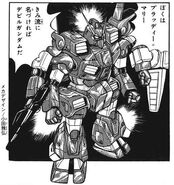 Bloody Mary in the manga

Retrieved from "https://gundam.fandom.com/wiki/Bloody_Mary?oldid=401145"
Community content is available under CC-BY-SA unless otherwise noted.