Though it resembles a Columbus-class transport, the Bladewood is actually a modified Space Ark-class training ship, and possesses one hidden twin mega particle cannon. However, due to its status as a civilian ship, the cannon turret is normally concealed. 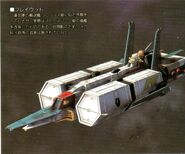 Add a photo to this gallery
Retrieved from "https://gundam.fandom.com/wiki/Bladewood?oldid=498401"
Community content is available under CC-BY-SA unless otherwise noted.