Gaia, Ortega and Mash first met in May, U.C. 0076, when the Zeon space forces began secretly practicing combat maneuvers in preparation for the upcoming war. The three were all assigned to the Mobile Training Battalion D Company, 2nd Platoon, and quickly became good friends.

When the war began in January, U.C. 0079, the trio participated in the attack on Side 5, piloting customized MS-05 Zaku I painted in dark blue. Though the operation was a failure, they demonstrated their famed "Jet Stream Attack" for the first time. During the Battle of Loum, the team, having switched to MS-06C Zaku II, was responsible for the capture of General Revil. Because of this achievement, they were reassigned to S-Type Zaku II. It was at this time that the team began using a black, purple, and gray color scheme for their mobile suits.[1]

The Black Tri-Stars came up with their own unique tactical maneuver with the high speed and maneuverability of the Zakus, developing their trademark "Jet Stream Attack". Moving in at high speed, the trio lines up one behind the other, forming a lethal simultaneous triple assault in which two of the members attack with ranged weapons and the last one attacks with a melee weapon. The danger of this maneuver is that dodging one attack puts the victim perfectly in the sights of the second or third attack. The three members of the Black Tri-Stars were said to be more skilled than an entire squad of normal soldiers, and they proved it constantly with their ruthless attacks on the Earth Federation's space forces. In July, U.C. 0079, the Black Tri-Stars, in their new High Mobility Zaku IIs, destroyed an entire Earth Federation reconnaissance fleet near the Zeon asteroid fortress A Baoa Qu.

In October, U.C. 0079, under the direction of Kycilia Zabi, the Black Tri-Stars receive new MS-09B Dom mobile suits and are transferred to Earth, where they join the 7th Terrestrial Mobile Division, 1st Mobile Suit Battalion. On November 6, the Black Tri-Stars arrive at Odessa, Ukraine to shore up the defenses of the mining facilities against the Earth Federation's all-out attack. The trio immediately sets out to ambush the White Base, during which Ortega manages to kill Medea transport commander Lt. Matilda Ajan. However, the Earth Federation's RX-78-2 Gundam pilot Amuro Ray is able to break through the deadly Jet Stream Attack by using Gaia's Dom as a jumping platform, and kills Mash in return, forcing the two remaining Black Tri-Stars to retreat in shock.

Gaia and Ortega return to Odessa where they honor the death of their fallen comrade, Mash, and decide the best way to both honor and avenge Mash would be to destroy the Gundam and the White Base. On November 9, the remaining two Tri-Stars attack the White Base during Operation Odessa. M'Quve, learning of their intent, berates them for only being interested in revenge, but Gaia and Ortega are not dissuaded and continue with their plan. With the triad broken, however, Gaia and Ortega are easily killed by the Gundam, putting an end to the Black Tri-Stars.

In the compilation film, the Black Tri-Stars battle against the Gundam is compressed into a single battle. Following Mash's death, Gaia immediately challenged the Gundam, only to be killed by a stab from its beam saber. As Ortega prepared to fire on the distracted Gundam, Sayla Mass in the Core Booster blasted Ortega's Dom with her beam cannons, killing him.

In most non-canonical appearances, the Black Tri-Stars' dialogue is recycled from their failed attempt to destroy the Gundam, referencing such events as stepping on Gaia's Dom, the failed Jet Stream Attack and Gaia being the last of the three to die therefore failing to avenge his allies. 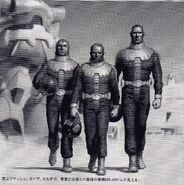 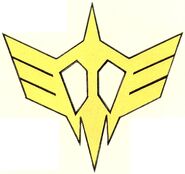