This article's name is tentative and does not represent any official name for its subject. As such, it is liable to change.

The Bit Control System is a system in Mobile Suit Gundam 00 that delegates and controls the remote bits/fangs of mobile suits.

The Bit Control System is a combination of hardware and software that remotely controls and manages the bits/fangs for the mobile suit pilot. The system itself can be controlled by a pilot or an AI system. If managed by a pilot, the pilot must be able to coordinate and configure the actions of the bits. Usually a normal human can't successfully manage all the bits as it draws attention from the pilot in combat. The Bit Control System assists in delegation of the bits to allow the pilot to utilize the bits with less difficulty. The Bit Control System is most effective with an Innovade or Innovator pilot; because of their use of quantum brainwaves allow the pilot to mentally direct the bits to make immediate changes in action during combat. While a normal human would have slower reaction time with the system, which is a liability in combat; this is why a Haro or other AI system is usually present for bit controls in combat.

The Haro is a self-contained AI, able to assist the pilot in controlling the bits with advanced abilities to effectively compensate for a human pilot's coordination abilities. Bit control can be delegated to a Haro within Celestial Being; on the other hand, Innovators use their quantum brainwave abilities to control their bits/fangs without the need of a Haro unit. Similar systems have been used by a computer, without the need for a Haro nor quantum brainwaves to help delegate controls. Celestial Being and Innovators have such a system(s) before AD 2307, however the Earth Sphere Federation did not successfully develop such a system until after AD 2312.

In AD 2302, Celestial Being tested the concept of remote offensive weapons system for its future Gundams. The GNR-000 GN Sefer and the GN-XXX Gundam Rasiel were used to test the capabilities of the Sefer's primary armament, the GN Proto Bits. The concept of the bits was later used on the GNY-0042-874 Gundam Artemie developed in the same year. The remote offensive weapons system later resurfaced in AD 2308 in the form of the GN Fangs deployed by the GNW-002 Gundam Throne Zwei and the GNMA-XCVII Alvatore. More forms of such weaponry started appearing after AD 2312 and was utilized by more mobile suits. 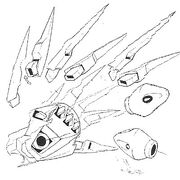 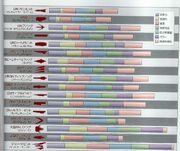 Performance comparison statistics between all the Fangs/Bits[1]