Biological CPU (生体CPU, Seitai CPU?) are artificially strengthened humans developed by the Earth Alliance's secret Extended Program, which is aimed at producing pilots for its mobile suits that would fight with the same efficiency as Coordinators. This would later expand to include having fighting capabilities on par with Coordinators. There are two types of Biological CPU, the Boosted Man (ブーステッドマン, Būsuteddoman?) and the Extended (エクステンデッド, Ekusutendeddo?).

In order to combat the Coordinators, the Earth Alliance experimentally injected some of their soldiers with drugs, had them undergo special training, and psychological manipulation to give them physical abilities greater than those of the Coordinators. The Boosted Man created as a result of these processes is considered a "Biological CPU" by the upper echelons of the Earth Alliance, and his/her entire past has been erased.

The Boosted Man have micro-implants surgically installed in their brains and glands, and are mentally conditioned to eliminate their sense of fear and increase their aggression during combat. They are also given regular doses of a stimulant called "Gamma Glipheptin" to enhance their stamina and reaction speed to the utmost limit, allowing them to pilot specialized MS with performance comparable to that of a Coordinator's MS. However, they suffer agonizing withdrawal symptoms as the effects of this stimulant wear off, forcing them to withdraw from battle when their time limit expires. Their addiction to and their need for periodic doses of the Gamma Glipheptin guaranteed their loyalty to the Alliance.

The known mobile suit pilots produced under this category were Clotho Buer, Orga Sabnak and Shani Andras, and they displayed combat abilities that troubled even very strong Coordinators such as Kira Yamato and Athrun Zala. All three were killed in battle during the closing stages of the First Alliance-PLANT War.

A catecholamine-based stimulant that, when administered to the human body, produces brain transmitters similar to dopamine and noradrenaline. This stimulant enhances the user's stamina and reaction speed, generate euphoria and also caused the user to display destructive impulses. However, as this substance cannot be produced by the human body, user who are no longer given the stimulant refuse to have contact with others and withdraw into their own world, and as they become exhausted, their ability to think deteriorates. Eventually, they become crippled and die.

An enhanced human who has better cooperativeness and is less violent than the Boosted Man. The method of modification is the same as the Boosted Man's, through the administration of drugs, surgery, and training from an early age. However, in order to maintain their mental stability, the Extended's memory is periodically manipulated by a sleeping capsule called a "cradle". Because of these measures, they have superior communication skills compared to Boosted Man, and are capable of various maneuvers and coordination.

In addition, because they occasionally go out of control, they are individually conditioned to respond to particular key phrases in order to control their behavior. Although these individualized "block words" are meant to restrain their actions, repeated use of them can send an Extended into a state of panic. Phantom Pain member Stella Loussier's block word is "death," Auel Neider's is "mother," and Sting Oakley's is "dream".

All three Extendeds died in combat, Auel perished at the hands of Shinn Asuka's ZGMF-X56S/γ Blast Impulse Gundam in a naval battle near Crete. Stella died after her GFAS-X1 Destroy Gundam was defeated by Kira Yamato's ZGMF-X10A Freedom Gundam in battle at Berlin. Sting was killed by Shinn's ZGMF-X42S Destiny Gundam in the battle of Heaven's Base. 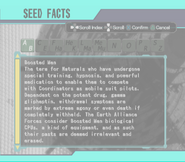 Information on the Boosted Men according to the Never Ending Tomorrow video game's Seed Facts.