A hovercraft-based land battleship, the Big Tray was propelled by thermonuclear jet engines and capable of rapidly traversing all terrains, including water.[1][2][3] It was armed with three triple gun turrets, two pointed at the front and one located at the rear. At the front of the ship are two large cannons.[4] The variant used by the Far Eastern Front Army replaced the front cannons with mega particle cannons for increased firepower.[5]

Despite its heavy firepower, it was mostly intended to serve as a mobile command center for generals, and contained a large command room.[1] Under Minovsky particle interference, it relied on the Dragonfly aircraft to search for enemies.[4]

The ship is equipped with two single guns on the lower part of the bow.

The ship is equipped with one gun each on the port and starboard overhangs and at the rear of the ship. Each turret is able to rotate 180 degrees.

The Big Tray-class was originally constructed prior to the One Year War as mobile command centers to supplement the bases of Earth Federation Forces, which were unable to cover all of Earth on their own.[6] During the war, its role became even more vital as Minovsky particles disrupted long range communications, forcing commanders to issue orders from the frontline.[3]

During Operation Odessa, 12 Big Trays participated in battle, including General Revil's flagship, Bataan.[7] Several Big Trays were used as decoys for the Bataan. One of these Big Trays, in the mountains of Lithuania, was destroyed by the Zeon; however, thanks to proper planning from Federation mobile suit pilot Captain Matt Healy, the Earth Federation did not lose any personnel and managed to destroy an MS-09B Dom and two MS-07B Gouf mobile suits.

One Big Tray served as a mobile command center for the Earth Federation Forces in South-East Asia. It played a prominent role in the Earth Federation's efforts to push the final remnants of Zeon's Earth Attack Forces off the Earth. It was guarded by several RGM-79(G) GM Sniper mobile suits.

Since the end of the One Year War, when large-scale offensives ceased to exist, the ship's strategic value rapidly declined. One ship, the Queen Turtle, participated in the defense of the New Guinea base during the Gryps War.[8]

The Big Tray's bridge, moments before being vaporized by the Apsaras III 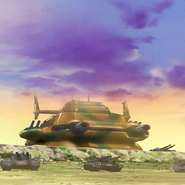 Big Tray seen in the intro of MS Sensen 0079