Beltorchika Irma (ベルトーチカ・イルマ, Beltorchika Irma?) is a character from the Universal Century timeline. She first appears in Mobile Suit Zeta Gundam as a member of the Karaba resistance group. She plays a minor role in Char's Counterattack - Beltorchika's Children, and makes other appearances in Day After Tomorrow - From Kai Shiden's Report and Mobile Suit Gundam Unicorn.

This young Karaba operative first appears to guide the rebels' Audhumla carrier plane to a secret base, boldly flying her replica biplane through the thick of a mobile suit battle.[1]

Despite her averse behavior towards war, Beltorchika immediately latches onto the famous Amuro Ray, and her strident defense of her hero's interests causes friction with many of her comrades, especially earning her the ire of Kamille Bidan after she went as far to try and convince him to hand over the RX-178 Gundam Mk-II to Amuro.

During the events in Day Of Dakar, she infiltrates the Earth Federation Congress under the guise of a news reporter, narrowly escaping harassment from soldiers manning the checkpoint with the help of Ajis Aziba, a Titans officer. After successfully commandeering the congress session with the help of other Karaba operatives, Beltorchika goes to the rooftop with camera in hand, filming the battle outside as the Titans attempt to stop Char Aznable's televised speech. She is last seen manning a gun turret on the Audhumla as Kamille and Char make their way back into space once more. In A New Translation an additional closing scene features the family of Karaba members at an observatory monitoring the explosions of the fleet battle come to an end, after it ends they go outside and she is sitting on a bench with Amuro.

Beltorchika didn't appear in person in the series, however, it was revealed in the novelization that she was still with the Karaba resistance group.

She and Amuro ended their relationship sometime before the Second Neo Zeon War.

In U.C. 0096, Beltorchika contacted Captain Bright Noa to inform him of the covert deployment of the General Revil. Bright suspected that the General Revil had been ordered by General Staff HQ and the Vist Foundation to destroy the Nahel Argama and all who know of the Laplace's Box. Beltorchika asked Bright as to his intentions, reminding him that the General Revil is key to the reconstruction of Earth fleet and would destroy the Nahel Argama and suggested using their contacts in Luio & Co. to warn them. Bright said that he intended to contact the Garencieres through their contacts in the Federation and Neo Zeon. He claimed to have the perfect negotiator, Kai Shiden, who hates Zeons with a passion.[2]

Later on, as Mineva Lao Zabi reveals to the world the truth of the Box, Beltorchika gets on the phone with Kai.

Appears in Day After Tomorrow - From Kai Shiden's Report 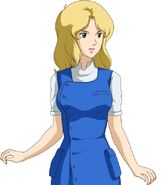 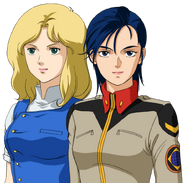