Bellri is a cunning, smug and cheerful boy who grew up with a workaholic mother that was never around but doesn't resent her for it. He's not very idealistic and a bit naive but has good skills.

Afterward, he became a cadet at the Capital Guard Academy, a week following the capture of the YG-111 Gundam G-Self's pilot, Raraiya. He went up the Capital Tower as part of the 10-10th class as they begin their first practical Zero-G training, in Rectens. The Capital Tower is attacked by the G-Self (as a distraction to allow other pilots to steal photon batteries). But Bellri manages to hold it off. After Dellensen Samatar and Luin Lee come to his assistance they capture the G-Self and Aida, who was piloting it, not knowing that she is actually his sister.[1]

Bellri Zenam as seen on Gundam Reconguista in G (manga)

Bellri Zenam as seen on Gundam Reconguista in G (manga) 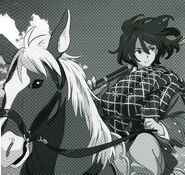 In Gundam G-Self Space Pack's cockpit (Gundam Reconguista in G: From the Past to the Future)

Retrieved from "https://gundam.fandom.com/wiki/Bellri_Zenam?oldid=479968"
Community content is available under CC-BY-SA unless otherwise noted.