Although he pretends to be a leader, he is initially small-minded, and at crucial moments, he is sometimes knocked on his buttocks by his companions Judau and Elle. He also has a self-centered side, and is often seen as a troublemaker, such as when he and Mondo plotted to sell the Argama to the Axis, putting his comrades in danger, and when he and Mondo surrendered to the Axis. However, by nature, he is a good friend, and through his many experiences, he has grown a great deal as a human being, showing qualities of a leader.

Although he was an amateur at MS operation, he trained with Mondo during his surrender to the Axis and acquired piloting skills in a relatively short period of time. However, he is not skilled enough to be called an ace, and when he boarded high-end machines such as the Zeta Gundam and ZZ Gundam, he was unable to handle them.

A citizen of the space colony Shangri-La, Beecha originally worked alongside Judau Ashta as a junk dealer, but through a series of events, he becomes the pilot of Hyaku Shiki on the Argama. His unhappiness with military life and rivalry with Judau caused him to temporarily switch sides with Mondo Agake until the abuse they suffered from Gottn Goh and the other crew members of the Endra made both of them realize they were happier on the Argama. However, as the conflict continues, Beecha grows out of his childish ways. Assuming command of the Argama's successor battleship, the SCVA-76 Nahel Argama, he even finds the courage to express his affection for long time love interest Elle Vianno. When Bright Noa is at La Vie en Rose as he cannot return to the ship for a while, he entrust the command of Nahel Argama to Beecha in order to train himself to become a captain to succeed him as captain of Nahel Argama in the future. 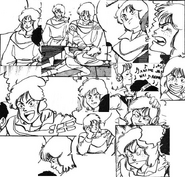