The Battle Bike "Ohtu" is a support vehicle that appears in Mobile Suit Victory Gundam.

Technically, the Battle Bike is a scaled-down version of the ZMT-A03G Galicson mobile armor. Comparing to its brother model, the "Ohtu" version is better suited for fighting more mobile targets; while the twin beam cannon is weaker than Kou's single cannon but has a higher rate of fire. It's also armed with fixed single machine gun in front. 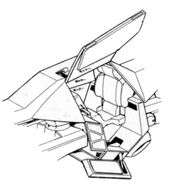