Battle Assault 3 featuring Gundam SEED is a 3D fighting game for the PlayStation 2. It is the sequel to Gundam Battle Assault 1 and 2.

C.E. 71. The Earth Alliance and PLANT are engaged in the First Alliance-PLANT War. Overpowered by the revolutionary Mobile Suits deployed by the PLANT's military organization, ZAFT, the Earth Alliance has built their own suits with brand new technologies. However, five ZAFT soldiers initiated a daring and brazen theft of the suits, leading to one young boy, Kira Yamato, to encounter the machine he'd call "Gundam".

Battle Assault 3 is a 3D fighting game fought on a large battleground as opposed to the preceding games' 2D gameplay. As such, characters are able to freely move around the battlefield. Interaction with the battlefield is also possible by knocking each other into obstacles such as buildings and may even pick up and throw objects at one another as well as weapons. Each Mobile Suit has three types of basic attacks - Light Attack, Strong Attack and Ranged. Because of this, beam saber attacks are no longer unblockable. Boosting/flight and ranged attacks both consume the energy gauge and quick recovery consumes it entirely. Inputting certain commands can allow for special attacks as well as devastating Super Attacks, though players only have three Super Attacks per round. They can also expend a Super Attack to activate the mobile suit's Special Ability to enhance their combat ability which can come in various forms such as ranged attack buffers or even transforming the mobile suit itself. Instead of going for three rounds, a player has a large health bar which is dependent on what the suit is - basic Mass-Produced suits have a single health bar which allows them to be harmed by all weaponry; Gundam-types have two half-bars, one for Phase Shift and one for normal. The Phase Shift needs to be broken before you can deal with the Base Armor, though throws pass through it; end series Gundams have full Phase Shift and thus weaker units have a much more difficult time breaking through. Due to balancing issues with most mobile suits being equipped with beam weapons, Phase Shift has a resistance to beam shots.

If one is fast enough, they can hit the Select button and initiate a button-pressing sequence called Real-time programming that can improve the mobile suit's ranged and melee capabilities. Pass this threshold, the player can then improve the machine's energy gauge and recover health through this method.

Unlike the preceding games, Battle Assault 3's roster is wholly focused on SEED and has nearly every single mobile suit and pilot featured in the anime. Mass-produced suits however are piloted by faceless grunts. Additionally, units from Wing and G can be unlocked as hidden fighters. 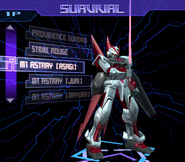 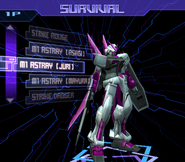 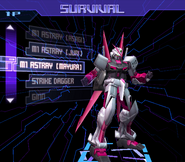