Knight of the Crimson Lotus

Battle, The Crimson Knight is a character in Superior Defender Gundam Force.

A member of the knights of Lacroa, his main weapon was a 4-round crossbow. He and several other knight gundams gave their lives in order to give time for Zero to escape with the aide of Princess Rele. He was defeated and melted down so his gundamium could be used to revive General Zeong. 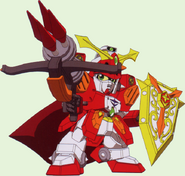 Retrieved from "https://gundam.fandom.com/wiki/Battle?oldid=350079"
Community content is available under CC-BY-SA unless otherwise noted.