The Gundam Wiki
Register
Don't have an account?
Sign In
Advertisement
in: Characters, Universal Century characters, Male,
and 2 more
English

Bask is portrayed as a brutal and despicable man, who despises the Spacenoids, massacres civilians, and attacks the enemy without regard for friendly forces in his line of fire. He is extremely arrogant and sometimes beats up his subordinates who have opinions about his strategy.

A member of the Earth Federation Forces. During the latter stages of Operation Stardust, Bask is placed in charge of the newly-constructed Solar System II superweapon and tasked with destroying the Delaz Fleet's colony drop. Bask fired the superweapon upon the advancing colony, but Anavel Gato destroyed the weapon's control ship, weakening its effectiveness and preventing the colony's destruction. Enraged by his failure, Bask prepared another bombardment of the Solar System II, this time directed at the Delaz Fleet itself. Although his subordinates pled with him to delay the attack because Federation soldiers would be caught in the blast, Bask ignored them and fired the superweapon, grinning all the while. The blast ripped through the mobile suits caught in it, including Kou Uraki's RX-78GP03 Gundam "Dendrobium".

After the colony drop, Bask gave a speech where he argued the actions of the Delaz Fleet showcased the Earth's vulnerability to outside threats and announced the formation of an elite counter-insurgency force: the Titans.[1]

By U.C. 0087, Bask is the field commander of the Titans. As commander, he oversees a lot of the dirty work in their quest to maintain control over all Spacenoids in light of the events that took place during the One Year War and Operation Stardust. Throughout his tenure, Bask shamelessly orders his subordinates to commit mass murder by gassing entire colonies or firing the Titans' deadly super-weapon, the Gryps II colony laser. He also used Kamille Bidan's parents as hostages in order to convince the Anti Earth Union Group to return the Gundam Mk-II prototypes that they stole from the Titans' headquarters at Green Noa II. This particular deed resulted in the death of Kamille's mother, Hilda Bidan, at the hands of Jerid Messa. Disgusted by Bask's action, Titan pilot Emma Sheen helped Kamille and his father Franklin escape by giving them pilot suits so that the three of them could commandeer the Mk-II prototypes and take them back to the AEUG.

Upon returning to the Argama, Reccoa Londe told Emma all about the Colony 30 incident, where Bask killed off the entire population with G-3 poison gas in order to end an anti-Earth rally. Ironically, Bask sends Reccoa out to lead a mission to gas another colony later on in order to prove her loyalty to the Titans after defecting from the AEUG. Much to her dismay, the AEUG fails to show up in time in order to stop them and Reccoa reluctantly carries out Bask's orders.

After the death of Jamitov Hymen at the hands of Paptimus Scirocco, Bask stood as the only obstacle preventing the latter from acquiring complete control over the Titans. He ultimately met his end when Reccoa and several other minions of Scirocco attacked his ship, the Dogosse Giar, while they were executing a mission with Rosamia Badam piloting the MRX-010 Psycho Gundam Mk-II. Due to all the confusion, Bask and his men were easily overwhelmed and defeated when Reccoa destroyed the Dogosse Giar with a direct shot at the bridge, killing Bask.

In the movie trilogy, Bask was killed by Yazan Gable instead of Reccoa during the battle between AEUG, Titans, and Axis. 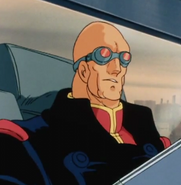 (Mobile Suit Zeta Gundam: A New Translation III - Love Is the Pulse of the Stars)