The Base Jabber is a single MS Carrier/Flight System that first appears in the anime series Mobile Suit Zeta Gundam.

Similar to the Principality of Zeon's Dodai YS bomber, the Base Jabber is a thermonuclear jet hovercraft designed to have a Mobile Suit stand on top of it as it flies. Using this sub-flight system, mobile suits that have extremely sloppy movement under gravity can improve their mobility while gaining limited flight capability. Hence, they are able to accomplish operations swiftly and solidly.

While the Base Jabber itself can be piloted, its front grips are designed to connect with all types of mobile suit manipulators, allowing the carried mobile suit to take control by grabbing onto them.

In U.C. 0093, the Earth Federation Forces developed a new Base Jabber, designated as the "Type 89". This unit's basic frame is similar to that of its predecessor; however, it is a space-use design mainly used for MS transportation. Its design allows two mobile suits to ride on it when its bottom propellant tanks are removed.

By U.C. 0096, the Base Jabber received minor improvements, making them 30% faster than the previous model.

Mounted on the forward section of the carrier, it is mainly seen used for support during battle.

The Base Jabber was used primarily by the Titans in the era of the Gryps Conflict. At the same time, the A.E.U.G. used the Dodai Kai. 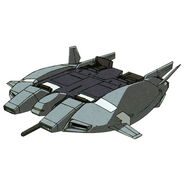 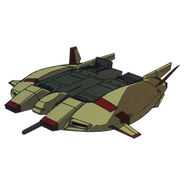 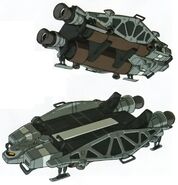 EMS-10 Zudah on Base Jabber in Gundam Build Fighters

Act Zakus on Base Jabbers in Mobile Suit Zeta Gundam: A New Translation

Base Jabber launching from a Garuda Class

Unicorn Gundam on Type 94 Base Jabber

ECOAS Jegan on Type 94 Base Jabber

Jegan Type A2s under attack on Type 89 Base Jabbers

Jegan Type A2 damaged on a Type 89 Base Jabber

Type 89 Base Jabber with a booster along with some cargo. (Gundam Narrative) 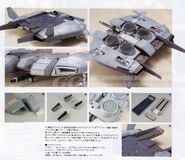 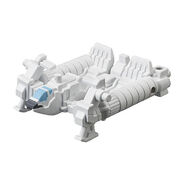 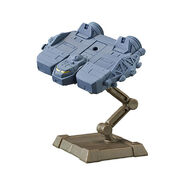 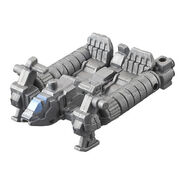 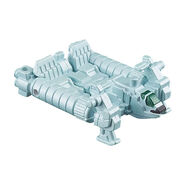