An ace pilot of Orb, and protector of the Orb vessel Kusanagi, Barry pilots a MBF-M1A M1A Astray. He is a skilled pilot and also a martial arts master, with the nickname "God of Fist". He is an atheist, and the word "Godless" is painted on his M1A Astray. Barry is extremely shy with women. Apparently after the Second Battle of Jachin Due, he leaves the Kusanagi.

Subsequently, he reappears in the Amazon Forest, where he saves Junk Guild personnel Yoon Sefan, from Courtney Heironimus and his ZGMF-X999A ZAKU Mass Production Trial Type. He later assists the USSA in their fight against the Earth Alliance forces.

In C.E. 73, he is seen helping guerillas fighting for independence against ZAFT and EA. Moreover he is Trojan Noiret's martial art master. He dies fighting Suu, a violent Combat Coordinator. 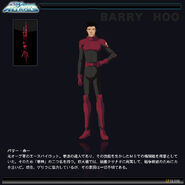