The Baroque is a mobile suit from Mobile Suit Crossbone Gundam: Dust.

The Baroque is a specialized machine owned by Evans Jilvester, the "Head Harvester" who controls Luna II and Green Oasis. The headless frame features a right arm that is equipped with a segmented sword that is over 40 meters in length and composed of connected Gundarium pieces.

It is a simple design that uses the MS as a control unit for wielding the Gundarium segmented sword. The Baroque uses the EMS-TC02 Phantom Gundam's design leaked from Jupiter as a base frame. It is also equipped with the prototype I-Field and Minovsky Drive "Phantom Light", giving it overwhelming defense against beam weapons. The Baroque differs from the Phantom, which was a prototype machine, in that additional cooling pipes were added to each part during the assembly stage, making the Baroque a slightly larger machine. The Phantom Light can be used continuously for about one hour due to improved cooling efficiency.

While the Baroque's lack of a head is symbolic, it is also due to not having any sensors for measuring external information. The pilot, the Head Harvester, controls the MS from a Psycommu cockpit that is a completely enclosed.

With the Minovsky Drive, the Baroque could generate a phenomenon similar to the Record Breaker and Victory 2 Gundam's "Wings of Light", named "Phantom Light".  There is a time-limit of 1 hour in using the Phantom Light due to a better  cooling system. It can also be applied to the ship as an additional means of propulsion. 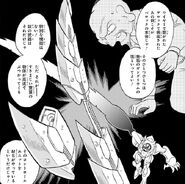 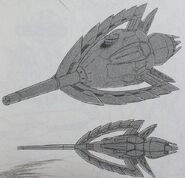 Retrieved from "https://gundam.fandom.com/wiki/Baroque?oldid=459943"
Community content is available under CC-BY-SA unless otherwise noted.