Ever since his son died, he stopped wearing his space helmet in the cockpit of his mobile suit.

He unwittingly helps the Tobia Arronax and Kincade Nau infiltrate their base to find the location of their leader. After their escape he chases after them. He fights Kincade evenly but then Tobia intervenes and tells him to stop fighting. Tobia claims that Dogatie is a dictator, then Burns starts disabling his Batalla, exclaiming that Tobia knows nothing of the hardships of Jovians. While this is taking place the battlefield is getting surrounded by more Batallas and Burns is going for the final strike on Tobia, until Zabine in the Crossbone Gundam X-2 and the rest of the Crossbone Vanguard's mobile suits intervene and drive him off. After their retreat, Burns is left in his Batalla missing its left arm and right leg, telling Tobia "Remember this, boy!" "If you wish to avoid tragedies like the one that claimed my son, then we Jovians have no choice but to invade Earth!"

Later, after the Jupitris-9 headed towards Earth, Burns was given the EMS-VSX3 Totuga and joined the Death Gale Team. His first mission, as part of the team, was to attack The Crossbone Vanguard's mothership after Zabine's coup, and to thoroughly defeat the Crossbone Gundam X-1. The attack had mild success, working in tandum with the other Death Gales' mobile suits, while his mobile suit dealt with defense and let the other's do the real damage. He even shot down an enemy Batalla with ease, using the hammer arms of the Totuga he broke the mobile suit in half, killing the pilot named Ronim.

After the battle, on the Jupitris-9, he realizes that Tobia Arronax is in the Gundam X-2 trying to escape with Tetenith Dogatie. He finds them in the 708th Storehouse preparing to leave and tries to stop them. He would allow Tobia to escape but he wouldn't let the princess to fly with, reluctantly Tobia did agree to this, so he bought them time, while Tobia made his escape. 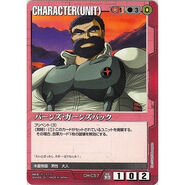 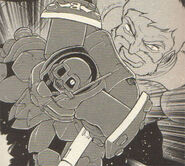 Add a photo to this gallery
Retrieved from "https://gundam.fandom.com/wiki/Barnes_Gernsback?oldid=447713"
Community content is available under CC-BY-SA unless otherwise noted.