After saving Freddie from two Eldora Bull Brutes and one Eldora Hover Brute and thereby completing the first mission in the mysterious world, Hiroto Kuga, May, Kazami Torimachi and Parviz were recognized as a force. Initially, Freddie gave them the name "BUILD DIVERS", baffling the four divers as they were not related to the famous Build Divers‎ force. Seconds before their force name was to be confirmed, May changed the second capital "I" to the lowercase "i" to differentiate themselves.

It was later revealed that Freddie had wanted to bring in the original Build Divers, having seen them in action, but a chance encounter with the four divers and Kazami's impulsiveness in responding to Freddie's call for help led to them being summoned instead. Freddie was then mistakenly convinced that they are the Build Divers after watching the four divers defeat the three enemy units chasing him. 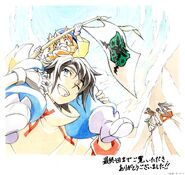