The BN-876 Scramble Gundam is a Gunpla that appears in Gundam Build Fighters Try Island Wars. The Gunpla was created by Yajima Trading to test the new battle system using the Plavsky Particle Mk-II.

A prototype Gunpla designed for the Plavsky Particle Mk.II, the Scramble Gundam is used to test the stability of the new battle system using this particle.[1][2] It has higher performance than previous Gunpla on the old system due to the Plavsky crystal being refined to a higher purity by Nils Yajima.[1] Known ratings for the Scramble Gundam include an output of 3,800 and a particle reaction speed of 0.03.[1] In the hands of an exceptionally skilled fighter, it is possible to control the Scamble Gundam like one's own limbs.[2]

The Scramble Gundam has flight capabilities when in MS Mode, but it can also transform instantaneously into a Flight Mode for high speed flying.[2] Usually, transformable Gunpla tends to have poor durability due to their complex structure, but the Scramble Gundam was able to have high durability as it adopts a simple transformation mechanism.[2] The clear parts all over the Scramble Gundam's body are for controlling the new Plavsky Particles, and through them a defensive particle field can be created.[2]

The Scramble Gundam is armed with a pair of head-mounted vulcans, arm-mounted beam rifles and two beam sabers stored on its side skirt.[2] When the Plavsky Particle Mk.II went out of control, the Scramble Gundam was also changed. It then shows the ability to manipulate other materialized Plavsky crystal for offensive or defensive purpose and even summon the Celestial Being, Photon Ray Gun (and the Diva) and the Colony Laser from different portals to attack its enemy.[1]

It's revealed in Gundam Build Fighters Amazing Ready that since Scramble Gundam is made for experimental purpose with orthodox design, it isn't very fun to use. Thus, Nils Yajima made a personal request to Meijin Kawaguchi III to build a brother unit that would be more fun to use in Gunpla Battle, resulting in the BN-876β Hot Scramble Gundam.

Mounted in the head, the pair of vulcans fire physical projectiles.[2] Although not very powerful, they are capable of rapid fire, and are used to intercept enemy missiles and the like.[2]

Stored on the side skirt armor, the Scramble Gundam's pair of beam sabers have drastically higher cutting power than other beam sabers due to the effects of the new Plavsky Particle Mk.II.[2]

A pair of beam rifles with integrated shield unit can be equipped onto the Scramble Gundam.[2] The beam rifles have long attack range and high attack power, their beam shots are strong enough to overpower the beam shots from the GNT-0000SHIA Gundam 00 Shia Qan［T］ and the MSZ-008X2 ZZII.[1][2] They can also emit beam sabers for close combat, which were used to knock back the ZZII.[1] In MS mode, the beam rifles are mounted on the forearms, and rotate forward for firing. In Flight mode, one of the beam rifles is attached to the back, with its gun barrel pointing forward and serves as that mode's main weapon, while the other beam rifle attaches to the chest with its gun barrel pointing backwards.[2]

Using the control capabilities of the clear parts all round the Scramble Gundam's body, it is possible to manipulate the Plavsky Particles, which have a high defensive capability, into a particle field.[2] The particle field is capable of stopping the KMK-B01 Kamiki Burning Gundam's Seiken-Zuki punch.[1]

The Scramble Gundam was created to test out the new battle system that is using Plavsky Particle Mk. II and proved to be quite powerful. However, a mysterious reaction caused the Gunpla to go berserk, attempting to break out of the testing room. However, it was stopped by an emergency shut off. Nils Yajima went to personally investigate what went wrong and, during another testing, realized that the events from eight years ago were happening again. The Gunpla went berserk and, with the Plavsky crystal going haywire, it took over the Yajima Labs. Sekai Kamiki, Yuuma Kousaka, Fumina Hoshino, Shia Kijima, Kaoruko Sazaki, Minato Sakai, Mirai Kamiki and Satomi went in with their Gunpla to rescue everyone and confronted the Scramble Gundam. Fueled by the prototype Particle System, the Gunpla proved to be too strong, even capable of summoning and unleashing Celestial Being, the Photon Ray Gun and the Colony Laser on the eight. It tried to finish them off with a Colony Drop, but the KMK-B01 Kamiki Burning Gundam unleashed its New Winning Road attack, destroying the Colony and ultimately overwhelming the Gunpla. When the dust settled, Yuuma and Sekai saw the Scramble Gundam being carried to the mysterious purple-haired girl Sekai met earlier, who wanted her own Gunpla. Fumina is able to convince her to surrender the Gunpla and that they would be able to help her build her own.

Defending with the Plavsky crystals

Summoning Celestial Being, the Photon Ray Gun and the Colony Laser

Unleashing Celestial Being, the Photon Ray Gun and the Colony Laser

Attacking with Celestial Being, the Photon Ray Gun and the Colony Laser 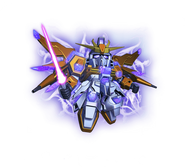 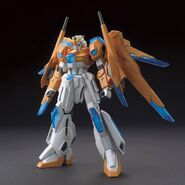 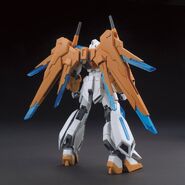