The BN-876β Hot Scramble Gundam is a Gunpla that appears in Gundam Build Fighters Amazing Ready. It is built and piloted by Meijin Kawaguchi III.

Mounted on the head, the pair of vulcan guns are mainly used as a mid-close range defensive weapon.

Stored on the side skirt armor, the pair of beam sabers are the Gunpla's primary melee weapon.

A modified version of the RX-93 ν Gundam's beam rifle.

A weapon formed via attaching four fin funnels around the beam rifle's barrel, this drastically increase the rifle's output, allowing it to fire even more powerful beams.

Carried on the left forearm, it is a modified version of the ν Gundam's shield and retains the original's built-in beam cannon. Attached to the Hot Scramble Gundam's underside during Flight Mode.

The Hot Scramble can generate a pair of energy wings from its back when the Fin Funnels are deployed. The wings are used to increase the speed of the Gunpla.

Since the Scramble Gundam is a testbed unit made for experimental purposes, and features an orthodox design, it isn't very fun to control. Thus, Nils Yajima made a personal request to Meijin Kawaguchi to build a brother unit that would be more fun to use in Gunpla Battle, resulting in the Hot Scramble Gundam. 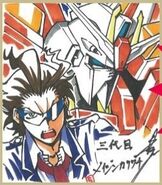 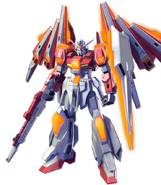 MS Mode in Gundam Versus

MS Mode in Gundam Versus (2) 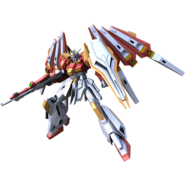 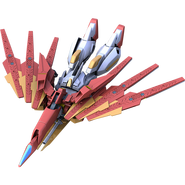 With Wings of Light

Retrieved from "https://gundam.fandom.com/wiki/BN-876%CE%B2_Hot_Scramble_Gundam?oldid=411985"
Community content is available under CC-BY-SA unless otherwise noted.