The G-Exes Jackedge is a customized, limited production variant of the WMS-GEX1 G-Exes commissioned by Bisidian. The suit is painted in dark colors to lower detectability, and is meant for highly skilled pilots in the Bisidian. Its armament is almost exactly the same as that of the G-Exes, except that it uses an enhanced variant of the beam rifle and has an optional beam tomahawk.

Mounted in the head, the pair of beam vulcan guns are used to intercept incoming missiles and enemy units at close range.

Two beam sabers that appear to be the same design as of those on the original G-Exes, they are stored on the backpack when not in use.

The basic long ranged armament of the G-Exes Jackedge, it is an improved version of the G-Exes' beam rifle and can be stored on the rear skirt armor when not in use. It has a knife attached at the bottom that can serve as a bayonet or be detached and wielded by hand. The knife can also be replaced by other weapon depending on the pilot's preference.

A weapon that is similar to the beam axe used by Shaldoll Rogue, but it has an additional emitter capable of producing a small triangular beam blade on the opposite side of the axe head.

A missile pod containing two missiles are mounted in each side skirt armor. The missiles have enough firepower to destroy an enemy unit within one shot.

The G-Exes Jackedge was equipped with the Vagan's Invisible Umbrella Stealth System which they have salvaged from the remains of Vagan Battleship as seen in episode 39.

The G-Exes Jackedge is created by Madorna Mobile Suit Workshop, commissioned by the space pirate group Bisidian. After its completion, the unit first sortied in A.G 151, in their search for the treasure Bisidian has been looking for some time.

These units were still used in A.G. 164 by the Bisidian in their combat engagements with the Vagan. 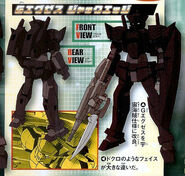