The Shaldoll Rogue is a customised version of the Shaldoll Custom created by Madorna Workshop for the space pirate group, Bisidian, and serve as the group's main mobile suit. It is painted in dark colors to lower detectability, and its right wrist joint has been modified into an equipment attachment point that usually mounts a DODS Buster. The suit's other weaponry includes beam vulcans mounted on the sides of the head, a beam axe, and a beam saber for close combat.

Mounted in the head, the pair of beam vulcan guns are used to intercept incoming missiles and enemy units at close range.

A simple beam saber that allows the mobile suit to engage in close combat during battle, it is stored on the backpack when not in use.

An axe-shaped handheld weapon used by the Shaldoll Rogue. It is the preferred close combat weapon as the Shaldoll Rouge usually attacks in a group, and in such a tight formation, an axe is easier to wield.

The Shaldoll Rogue can be equipped with the Vagan's Invisible Umbrella Stealth System which they have salvaged from the remains of Vagan Battleship.[1]

The Shaldoll Rogue is created by Madorna Mobile Suit Workshop, commissioned by the space pirate group Bisidian. The unit first sortied in A.G 151, in search for the treasure Bisidian had been looking for. 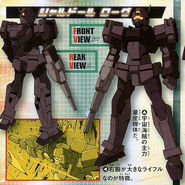