Azee Gurumin is a character that appears in the Mobile Suit Gundam IRON-BLOODED ORPHANS television series.

Azee is a pilot with a cool personality who carries out orders from Naze Turbine calmly during combat. She speaks in a straightforward manner and acts as a mentor for the Tekkadan members.

Azee is a highly skilled pilot and is easily far more capable than most pilots, even those who utilize the Alaya-Vijnana system; Eco even refers to her as Turbine's Ace. She often battles alongside Lafter Frankland, and the pair are the first to go to the battle lines.

Not much is known of Azee's past, other than that like Naze's other wives, she was rescued from poor circumstances and accepted the offer to join his crew the Turbines years ago. Ever since then, she has served as one of Naze's most skilled pilots, and one of his wives, alongside her partner Lafter, also a wife of Naze. When the Turbines enter into conflict with Tekkadan, Azee along with Lafter, meet them in battle until a ceasefire was agreed upon. Due to Naze being impressed by Tekkadan, he agreed to swear brotherhood with Tekkadan's leader Orga Itsuka. As such Azee, along with Lafter, were sent to help train and protect Tekkadan. Ever since then, Azee has fought alongside Tekkadan and has proved a valuable instructor and pilot to them.

After being rescued in the past by Naze, Azee agreed to become his wife and join Turbines, a subsidiary of Teiwaz. While it is unknown what being one of Naze's wives actually entails, or if it's ever consummated, Azee is nonetheless fiercely loyal to Naze and obeys all his orders without question. However, she is not beyond keeping secrets from him as when she found out that Lafter had feelings for Akihiro Altland, she agreed to not tell Naze until Lafter was ready. The death of Naze greatly affected her, but she put aside her grief to be a leader to the remaining Turbines and securing new work for them. She later dresses in a white suit and hat in honour of Naze.

Lafter is Azee's fellow companion and trusted ally. They often participate in battles together and outside battle, they share a very close relationship. They're frequently seen confiding and traveling together, though as of late Lafter has been spending more time with Akihiro when Azee is busy working. So close is their relationship that Azee is able to immediately realize that Lafter had fallen in love with Akihiro and due to their friendship, she agreed to not tell Naze until Lafter was ready. After Naze's death, Azee tries to convince Lafter to join Tekkadan as a pilot as she knows Lafter loves Akihiro. However, Lafter chose to remain with the remaining Turbines after her date with Akihiro. Subsequently, Lafter's death at the hands of Jasley's men caused Azee to fall ill as she blamed herself for leaving Lafter alone.

While their relationship is a highly professional one where Azee has helped to train Akihiro, it cannot be denied that she has grown fond of him. Though bearing no romantic feelings for Akihiro, she is concerned for his well-being and dutifully watches over him on and off the battlefield. When Azee later finds out that Lafter had feelings for Akihiro, Azee seemed to approve of the possible relationship even going as far as agreeing to keep it a secret from Naze. Knowing Lafter's fondness of Akihiro, Azee tried to convince her to join Tekkadan after Naze's death, but Lafter still decided to remain with the other Turbines' crew. 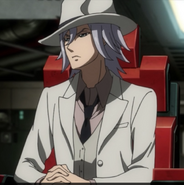