Aya Fujisawa (フジサワ・アヤ, Fujisawa Aya?, commonly called by her Diver name Ayame (アヤメ, Ayame?)) is a character who appears in the Gundam Build Divers television series. She is the builder and pilot of the RX-零 RX-Zeromaru.

A female Diver who is dressed as a ninja. A mysterious person has assigned her to watch over Riku's activities.[1] However, she later betrayed this person to help Riku.[2] She's also portrayed to have a "Kuudere" personality.

Aya's Diver form has acquired a large number of unique ninja techniques while training in the world of GBN. Her impetus for learning these skills seems to be related to the Gunpla she used before the RX-Zeromaru, the F9-1 (F-Kunoichi) Gundam, which is based off of the F91 Gundam F91.[3]

Ayame first met Riku and his teammates in the desert, and gave them a ride to the Perisia Area.[4] Later on, she joined Riku's Build Divers force as a undercover spy.[5][6] During the Coalition of Volunteers assault on the base of the mastermind behind the Break Decal, Ayame was ordered by the mastermind to attack Riku, who was getting close to the mastermind's location with Sarah's help.[6]

While battling Riku, Ayame revealed her past. She used to play GBN alone until she met members of the force Le Chat Noir, which exclusivey used SD Gunpla, who invited her to join. With Le Chat Noir, Ayame's skills improve and the force climb the Force Ranking smoothly, breaking into the top 30. However, the higher-level opponents know more about the pros and cons of the SD Gunpla, and the force suffered defeat after defeat, resulting in internal squabbles that broke the force apart, leaving Ayame the lone member. To get the force back together, Ayame visited a mercenary to get back an unique SD Gunpla that used to belong to the Le Chat Noir's leader. This Gunpla was made using parts data from the other members of the force and a sign of their friendship. The mercenary, who eventually became the mastermind of the Break Decal, agreed to give the Gunpla back, provided that Ayame worked for him.[2]

Although Ayame was aware what she had done was wrong, she felt she had gone down this dark path too far to return. However, Riku and Sarah convinced her otherwise and in a critical moment, she decided to betray the mastermind and fought against one of his three hired mercenaries, allowing Riku and Sarah to reach the mastermind's room. Using the mercenary's lack of knowledge about Gunpla, she successfully defeated him but her Gunpla was damaged in the process.[2] She was unable to return to battle due to this damage, and watched helplessly as the Coalition took on Tsukasa and won.[7]

After the Coalition's victory, Ayame was too ashamed of her past actions and quickly left. She then become reluctant to meet the Build Divers. Later, Kyoya Kujo revealed to Riku his suspicion that Ayame was behind the anonymous leak that provided the Break Decal distribution route and a list of players who brought them. He also noted that she seemed to have log in occasionally, with notifications to her force turned off. One day, Ayame visited the Le Chat Noir's Force Nest, and was surprised to meet Kozy and Su, who revealed that they had gotten back Kozy's SD Gunpla. They thought Ayame had regained it for them, and she immediately realized this was the work of Riku and friends. Kozy and Su were glad to know Ayame had found new teammates, while Ayame admitted that she care for them, and proudly declared them her teammates, tearfully smiling for the first time since the collapse of Le Chat Noir.[8] 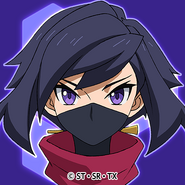 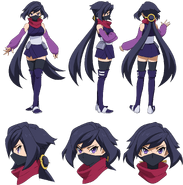 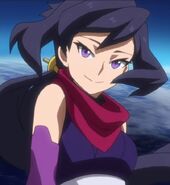 Succumbing to a Petit’gguy's cuteness