Auel Neider (アウル・ニーダ, Auru Nīda) is a character from the anime Mobile Suit Gundam SEED Destiny. One of the three extended pilots from the Phantom Pain, he served under the command of Neo Roanoke during the Second Alliance-PLANT War.

Auel is the most impulsive and brutal of the three, killing his enemies mercilessly and even laughing crazily when he kills many people. His personality shows both cheerful and brutal sides. He's also very protective of his "sister" and partner Stella, almost killing a man who tried to force her to move out of a spot she was sitting on. Auel's block word is "mother".

Like his fellow Extended pilots, Auel has been through extensive military training and is skilled in the use of firearms, infiltration and Mobile Weapon piloting. In addition to being able to pilot Mobile Suits designed for Coordinators, he is also able to hack and rewrite the operating systems of a Mobile Suit and customize it for personal specifications within seconds. Because Extended pilots are merely perfected for war and nothing else, they all suffer psychological and physical side effects from their enhancements. Their bodies are often maintained by a full medical team, ready with drugs and advanced medical devices to keep them functioning. However, their conditions are often difficult to manage and their lifespan is often limited to a few years due to their unstable nature and being used as living instruments of war.

What Auel vividly remembers is that his mother was a researcher at the Alliance lab in Lodonia. He was chosen to be subjected to the brutal training program to produce super soldiers to fight against Coordinators.

Together with his comrades, he sneaks into the PLANT colony Armory One, where he steals one of the three new Gundam-type mobile suits, the ZGMF-X31S Abyss Gundam. He then uses the heavily armed suit to wrack havoc inside the colony, killing many ZAFT soldiers.

He was involved in two other battles in space. The first in a debris belt, and the second on the remnants of the destroyed PLANT colony Junius 7 that was being dropped on Earth by Coordinator terrorists, and after the start of the Second Alliance-PLANT War, Auel and the rest of the Phantom Pain go to Earth.

There they are again involved in several battles against the ZAFT ship Minerva, however with no great success. Auel however is able to sink one Vosgulov-class which accompanied the Minerva.

Auel and his two comrades later investigate the ZAFT-controlled city Diokia, where the three for the first time meet Shinn Asuka and Athrun Zala, however none of them knew who the other is.

Later when ZAFT discovers the laboratory in Lodonia and Auel finds out about it, he freaks out, because his mother was stationed there. In the confusion, Auel says his trigger word "mother" and collapses into tears. However, he quickly gets help from the doctors on board the ship. He then again fights against the Minerva at the Dardanelles, where the Abyss is damaged by the ZGMF-X10A Freedom Gundam,[1] however it is quickly repaired.

Shortly after Stella was taken into the care of the Minerva, Auel and Sting had all of their memories of her erased. The latter recalled nothing, but Auel felt that something was missing, suggesting his amnesia was not complete. During the Battle of Crete the Abyss is destroyed by Shinn Asuka when he uses the beam javelin of his ZGMF-X56S/γ Blast Impulse Gundam to stab directly into the abdomen of Auel's suit, which causes the suit to explode under water, killing Auel in the process.[2]

In the novel version, he remembered Stella at the time of his death, and meets his end peacefully, thinking of Sting and Stella.

Stella Loussier
Most of the time, Auel treated Stella either with some sort of contempt or as a weapon. In the novelization, it was mentioned that Auel envies the fact that Stella always seems carefree. Unlike Sting, after his memories of Stella were erased, Auel still had a feeling in the back of his mind that something was missing, such as before his final battle, he noticed that Stella's mobile suit was missing, though he didn't know exactly what he was thinking of at the time, suggesting that he cares about Stella just as much as Sting, if not more so. 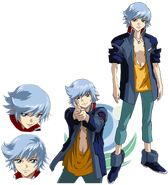 Auel in EA Pilot Suit (The End of the World, HD Remaster)

Auel holding a gun to an EA officers face (Return to the Battlefield, HD Remaster)

Auel's mother as shown in a flashback

(The Shadows of War, HD Remaster) 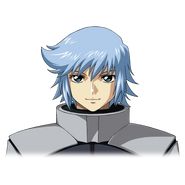