Atra Mixta (アトラ・ミクスタ, Atora Mikusuta?) is a character that appears in the Mobile Suit Gundam IRON-BLOODED ORPHANS television series. She is friends with the CGS boys and has a crush on Mikazuki Augus.[1]

Unlike most children in Chryse, Atra has learned how to read and write. She was taught how to do so by Haba.[2]

Due to her job making deliveries to CGS, she also learned to drive at a very young age.[3]

Atra used to do the cleaning up at a strip club located in the slums of Chryse and the strippers who worked there would constantly bully her. One day, she ran away and was starving. It was there that she met Mikazuki. Mikazuki got Haba to help her and she got a job working at Haba's Store.[4] After the CGS third group members formed Tekkadan, she became their cook.

She has a crush on him. They met outside a shop when Atra was ten years old and starving.[4] Mikazuki asked the owner of the shop to give him any food that was worth what little money he had for her, and the shopkeeper responded by giving Atra food and a workplace. Atra made the bracelet that Mikazuki wears on his left wrist, and he treasures it greatly. He can be quite protective of her as he nearly crushes Hush Middy's arm when the latter was about to get physical with her during an argument. As Mikazuki's physical well-being deteriorates due to him seeking higher compatibility with his Gundam via the Alaya-Vijnana system, Atra begins to show anguish over his willingness to sacrifice himself. On the night before the final battle with Rustal Elion's fleet, she tearfully confesses that she loves him. In response, Mikazuki hugs her from behind and reveals that she is precious to him and that he will fight so she can stop crying. After learning of Mika's feelings, they eventually consummate their relationship in an attempt to conceive a child. Although they both seem confident that they were successful in their attempt, Mikazuki acknowledged that it was still too early to determine if Atra was actually pregnant when he broke the news to Kudelia. Despite this acknowledgement, Mikazuki still asks Kudelia to help Atra raise their child in the event that he was killed, or otherwise rendered incapable of helping to raise the child himself. Unfortunately, those events came to pass when Mikazuki was killed in the final battle with Gjallarhorn at Tekkadan's base on Mars. However, Mikazuki and Atra's effort to conceive a child proved fruitful, and Atra gave birth to their son, Akatsuki Augus Mixta Bernstein, after the conflict. Together, they were shown to be living a peaceful life on Sakura's farm on Mars.

Atra views Kudelia as a good friend and a rival for Mikazuki's affections. The latter played a role in her choosing to join Tekkadan. After meeting the Turbines and learning about Naze's harem, Atra begins to accept Kudelia as a fellow potential "wife" of Mikazuki. She later tells Mikazuki and Kudelia that they are all family. Atra eventually gives Kudelia a bracelet of her own, matching the ones already worn by herself and Mikazuki. It is also shown that Atra and Mikazuki visit Kudelia at her office on Mars when Mikazuki is not on duty. After Mikazuki and Atra made the decision to conceive a child, Mikazuki asked Kudelia to help Atra look after their child in the event that he were rendered unable to do so. Kudelia was initially heartbroken upon hearing the news, not fully realizing until a moment later that Atra actually wished for a polygamous romantic relationship between herself, Kudelia, and Mikazuki. Kudelia laughed at how strange their situation was, but fully accepted the love triangle between them, and agreed to their individual requests. After Mikazuki was killed in the final battle, Kudelia made good on her promise to Mikazuki and took every opportunity her schedule could allow visiting Sakura's farm to be with Atra and her son, Akatsuki. At an official promotional event held in Shinjuku on April 9, 2017, it was revealed that Atra and Kudelia married.[5]

Haba is her (former) manager and is very kind to her. Haba easily agrees to let her quit when she decides to become a cook for Tekkadan.[6]

Atra as a child.

Appearing in the 1st opening 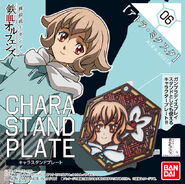