The Atmosphere Entry Transport is an unarmed transport capable of both space and atmospheric flight. For the purpose of reentry, its bow is fitted with four thruster nozzles, and it can deploy an inflatable heat shield from its front section. After entering the atmosphere, it can deploy the carried mobile suits from two hatches on its bottom.[3]

The Atmosphere Entry Transport was used in A.C. 195 by OZ to transport their new frontline mobile suit, the OZ-02MD Virgo, across the Earth as part of Operation Nova, a campaign to destroy any resistance to its global unification efforts.

After OZ's Lunar Base was taken by the White Fang, they would continue to use the tmosphere Entry Transports to carry Virgos and their new WF-02MD Virgo II Mobile Dolls into battle against OZ's remaining space forces. Many Transports would be used during White Fang's attack on the Space Fortress Bulge.

On December 24th, A.C. 196, numerous Atmosphere Entry Transports were used by the Mariemaia Army to deploy the MMS-01 Serpent mobile suits from the resource satellite MO-III to Brussels, the capital of the Earth Sphere Unified Nation. Zechs Merquise, a member of Preventer, attempted to intercept them in the OZ-00MS2B Tallgeese III. However, he was only able to destroy three of them before he was stopped by Dekim Barton, who threatened to drop colony X-18999 onto Earth if he continued to attack. 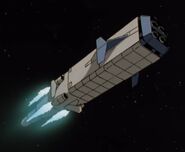 Destroyed by the Tallgeese III