Aston was a man of few words, who often appeared with a cold and serious face. This might be due in part to his past as a Human Debris, where he was forced to silence his feelings in order to survive the hardships of slavery.

Aston has undertaken the Alaya-Vijnana surgery, which grants him greater spatial awareness and information transfer rate. Besides being an experienced mobile suit pilot, he can also pilot a mobile worker.

At some point in his life, Aston became an orphan and was trafficked as a Human Debris, eventually coming under the ownership of the Brewers. There, Aston was forcibly implanted with the Alaya-Vijnana System, like many other Human Debris. Alongside Masahiro Altland, Derma, Pedro, and Vito, Aston served as a mobile suit pilot under the command of Kudal Cadel, the pilot of the ASW-G-11 Gundam Gusion. When the Brewers were defeated by Tekkadan, the group's surviving human debris were offered a place in Tekkadan by Orga Itsuka, and Aston accepted the offer. Later, Aston played a role in the battle of Edmonton when he arrived on Earth as part of Eugene's reinforcement to help the other Tekkadan members.

Two years later, Aston had became a part of Tekkadan's Earth branch and a close friend of Takaki Uno and his sister, Fuka Uno. During the months long war between Arbrau and SAU, Aston gave numerous amounts of advice to Takaki and acted as his second-in-command. In battle, he fought in the front while Takaki supported him from the back. However, Aston was killed in action shortly after taking a fatal wound from McGillis Fareed in place of Takaki, ironically unaware of the alliance between McGillis's Gjallarhorn faction and Tekkadan.[1]

Akihiro Altland
Akihiro had proposed that the ex-Brewers' human debris who had no family name to take on his family name. Aston accepted. When Aston was killed in the war between Arbrau and SAU, Akihiro was enraged and personally pursued and fought with Galan Mossa, who was responsible for causing the war that ultimately killed Aston. 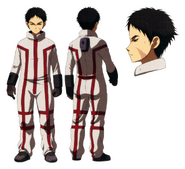 An illustration of Takaki and Fuka with Aston, used as the latter two's photo.