Arthur Trine (アーサー・トライン) is a fictional character in the Cosmic Era timeline, making an appearance in the anime Mobile Suit Gundam SEED Destiny. He is second-in-command of ZAFT's battleship LHM-BB01 Minerva.

The deputy captain of the Minerva, who serves as Talia's aide. Arthur lacks his captain's experience and tactical ability, and he is often bewildered by her seemingly reckless decisions. Nonetheless, he is friendly and reliable, and has a good rapport with Shinn and the other pilots. However, he tends to make a mountain out of a molehill.

As a deputy officer, Arthur is skilled in giving combat orders and is frequently in charge of briefing pilots. Also, as a coordinator, he naturally has improved skills which may help him while in combat.

Arthur was the first officer of the Minerva and was a trusted friend and colleague of Captain Talia Gladys.[1] At the Battle of Messiah, Gladys told him to look after everyone when the Minerva was damaged and crashed on the Moon. Following the end of the Second Alliance-PLANT War, Arthur was among the members of ZAFT behind Lacus Clyne, standing next to Dearka, Yzak and Shiho.[2]

During the Omake Quarters Drama CD, Arthur hands the remaining personal belongings of Gladys to her son, William. During their time together, they reminisce of the late captain, as well as discuss her actions. The two eventually promise to drink together once William comes of legal age. 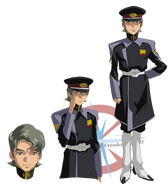