Arth (アス, Arth?) is a character from Mobile Suit Gundam: The 08th MS Team. He was a Principality of Zeon mobile suit pilot.

Not much is known about Arth's background. At some point in late November, U.C. 0079, he and his two teammates Dell and Topp - piloting a MS-06JC Zaku II with some of its parts missing - stopped for food in the village inhabited by Kiki Rosita.

As a test to their response, Arth dropped his Zaku's axe, nearly crushing one of the village's children, which may have been his intent. As Kiki tries to deliver the food to Arth, he lifts Kiki aggressively, only making Topp issue an order to Arth to behave, or she will shoot him down, marking him as KIA.

As Arth opens his Mobile Suits' cockpit, Kiki threw his food onto his face, causing him to lose control on the Zaku's manipulator, dropping Kiki from above. Arth was killed by one of the guerrilla's rockets while the cockpit was opened, and it sparks a trigger on the guerrilla's assault. 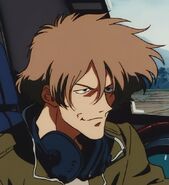 Retrieved from "https://gundam.fandom.com/wiki/Arth?oldid=434841"
Community content is available under CC-BY-SA unless otherwise noted.