Artemis is an asteroid fortress in the series Gundam SEED.

Created in CE 35, the Artemis asteroid fortress was built by the Eurasian Federation at Lagrange 3 during the space arms race taking place at this time. While Artemis's location is considered strategically worthless, the Eurasian forces nonetheless protected it with a Lightwave Barrier known as the "Umbrella of Artemis". This defense gave Artemis a reputation as an impenetrable fortress. Since the power requirements of a lightwaver barrier are immense, the "Umbrella of Artemis" is only activated when enemy forces were sighted.

When the First Alliance-PLANT War began, Artemis was still considered unimportant so ZAFT never attacked it. This however changed on January 27, CE 71, when the newly developed Archangel fled its pursuing ZAFT forces to the fortress, which was the closest allied base they could reach.[1] The commander of Artemis, Gerard Garcia, however planned to steal the ship and the GAT-X105 Strike Gundam for the Eurasian Federation, the strongest rival of the Atlantic Federation. While trying to get control over both units, ZAFT pilot Nicol Amalfi used the Mirage Colloid stealth system of the stolen GAT-X207 Blitz Gundam to sneak near the fortress while the shield was down and attacked it. When the personnel of the fortress activated the shield, Nicol destroyed the lightwave barrier generators, allowing his ship and comrades to attack Artemis. The crew of the Archangel used this opportunity to escape, while ZAFT caused massive damage to the fortress.[2]

Afterwards, the CO of Artemis contracted the famous mercenary group Serpent Tail for defense, in order to maintain Artemis' reputation (and also to acquire one of the Astray prototypes). When he tried to double cross the mercenaries, he was however tricked by them. By September, C.E. 71, Artemis was looked upon as an embarrassment, even by operatives from the Eurasian Federation. Later, when the CO ordered Task Force X's Canard Pars to be detained, Canard escaped the asteroid fortress with the Agamemnon-class vessel, Ortygia , whose crew were loyal to him.[3] 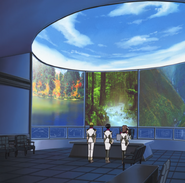 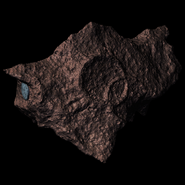