Quiet and professional, he's usually overshadowed by his charismatic superiors.

He is one of the few regular crew members of the Archangel who survived ZAFT's G-weapon robbery operation, and serves as the ship's helmsman. His rank on the bridge is second only to Captain Murrue and First Officer Natarle. Although he is usually hidden behind Natarle, he is a very capable soldier with good judgment and execution skills, and often serves as a coordinator for the bridge crew.

His steering skills are outstanding, and he is able to successfully complete almost 100% of the evasion orders given by the captain. When the Archangel was attacked on the underside of the hull by an enemy MS on the surface of the sea, in order to secure the firing line of the main gun, he made the Archangel, which is more than 400 meters long, do a barrel roll under gravity. Even after the Archangel separated from the Earth Alliance, he continued to work together with the Archangel and continued to hold the controls.

After the ceasefire, he became the Archangel's helmsman again. In the battle, he avoided an attack by Minerva that suddenly appeared from the front by rolling the ship 90 degrees. His divine steering skills are still alive and well, and he is one of the contributors to the Archangel being called the "unsinkable ship". 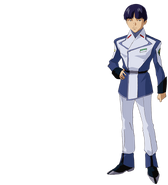