It has the ability to run and follow MS-centric maneuvers. It has a turret in the center of the vehicle with a single machine cannon, and a hatch in the rear of the vehicle for loading and unloading troops, and was used for scouting, reconnaissance, and troop transport.

Mounted on the upper turret of the main body, it is manually operated by the gunner.

A small caliber machine gun mounted in front of vehicle's left side.

A total of twelve 4-tube missile launchers could be optionally mounted, which could be bundled into a two-by-three array and installed on both sides of the machine cannon turret.

Mounted on each side of the vehicle, these dischargers can launch smoke rounds, enshrouding the vehicle in an obscuring layer of smoke, making it difficult for the enemy to target. 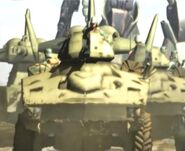 Armored Vehicles in formation with Zakus. Notice the middle one is equipped with Missile Launchers (Zeonic Front) 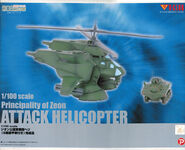