A boy with an aggressive atmosphere who speaks with a Kansai dialect.

In "Before", although he recognizes the corruption of a Break Decal, he is attracted by the fun and acts as a Mass-Diver. In "After", he changes his way of thinking, ceases to be a Mass-Diver and participates in the Coalition of Volunteers assault led by Kyoya Kujo.

Zen is Ark's best friend. Both are members of the force ZA-∀Z, the team name has the initials of Zen and Ark.

Ain Soph and Ark participated together in the Coalition of Volunteers. 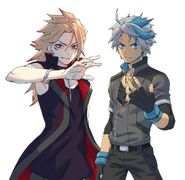 Retrieved from "https://gundam.fandom.com/wiki/Ark?oldid=474111"
Community content is available under CC-BY-SA unless otherwise noted.