Arista was first introduced when Reiji gave one of the two gems he had to Sei, claiming that if Sei were to make a wish on the stone, Reiji would come to grant his wish. This is proven true as Sei was about to lose a duel with Susumu Sazaki's Gyan; when Sei wished to avoid losing, Reiji was brought into the Iori Hobby Shop's battle room and take over control of the Build Strike. At the same time, Sei notices that the gem in his pocket was glowing. In light of these events, Sei kept the gem on his GP-Base, whereas Reiji had the other in his bracelet.

The crystal was brought up again when Reiji confronted Chairman Mashita, who in his mind had seen Reiji with a gem.

Later on, as an attempt to mend the rift between Reiji and Aila Jyrkiäinen, Sei made the gem into a pendant and had China Kousaka gift it to Aila before their battle. During the battle, the conflicting mind of Aila against the mind-altering effect of the Embody System somehow caused her Arista to trigger the same wish effect Sei had previously caused. As a result of the trigger, the level of Plavsky Particles in the arena increased dramatically, with the particles, including all known Aristas, glowing into an orange light, causing a resonance. It was at the time that Reiji and Aila developed a mental link that allowed her to fight off against the effect of the Embody System.

Eight years after Reiji's disappearance, Nils Yajima and researchers at Yajima Trading began experimenting with a refined, artificial Plavsky crystal for a new control system for Gunpla Battles with the BN-876 Scramble Gundam. Unfortunately, an unknown factor began to unknowingly wreck havoc on the system and cause it to go out of control.

When they are inert, the Aristas appear as a simple azure colored gem, but even slight emotion, such as agitation, can excite the Plavsky Particles within. When the emotions of any one of the users reach a significant level, such as strong wishes or desires, all the Aristas would resonate to one another; in doing so, they shine brightly in a golden hue, and can connect the mental thoughts of at least two people. A possible side effect of this phenomena,  as observed by Nil Nielsen, is that it multiplies or generates nearby Plavsky Particles, such as the ones in the World Tournament Battle Stage. It is unknown if the particle generation is due to the close proximity of the polish crystals, intense emotions, or resonance with the hidden giant crystal hidden underneath the stage. When the emotions of holders are further intensified, it may even cause the Gunpla Battle System to malfunction and generate a battle stage outside of the system. This happened during the end of the 7th GBWF, where an excited Arista brought forth the entire fortress A Baoa Qu into the arena and destroyed the arena ceiling. Lastly, it may enable one's will to bend existing physic laws, such as transporting Aila to Arian without the need of a teleporting Arian.

For the Arians, the crystal have one additional property, in that in anchors Arians to Earth during their stay. As soon as their piece of Arista disperse, they are forced to return to Arian. 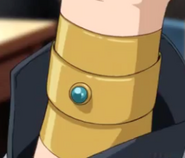 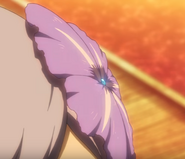 Synthetic Plavsky Crystal diagnostic
Add a photo to this gallery
Retrieved from "https://gundam.fandom.com/wiki/Arista?oldid=372027"
Community content is available under CC-BY-SA unless otherwise noted.