A space pirate of Neo Russian origin, Argo Gulskii and his crew conducted various thefts before being captured by the Neo Russian military. In one incident, Argo's ship was attempting to escape law enforcement officers when it accidentally crashed into a small space station manned by Andrew Graham and his wife Norma. As Graham's wife was about to be sucked into space, Argo entered in a space suit and attempted to save her but was too late. Maddened by fury and grief, Andrew's mind instead remembered the event as Argo coldly throwing Norma into space and so dedicated his life to killing the space pirate.

Due to Argo's large size and strength, special measures were taken to keep him under control. In order to keep Argo loyal, Neo Russia installed a small bomb on his chest and kept his crew captive in a secret location. Argo was told that if he used the GF13-013NR Bolt Gundam to win the 13th Gundam Fight he would win the freedom of himself and his crew. Argo agreed and was placed in a prison in Neo Russia's Earth-based territory. Neo Russian agents then used a strategy which had proven effective in past Gundam Fights; they spread rumors that their country's fighter could be found in the small village where the prison was located. Once Gundam Fighters arrived, they were detained for life and their Gundams raided for technology to increase Neo Russia's own chances of winning. During the 13th Gundam Fight, Domon Kasshu fell for these rumors and headed for the small village ahead of his partner Rain Mikamura. Quickly imprisoned, Domon caught the attention of Argo when he showed his fighting talents in continuous numbers of escape attempts.

With the help of Argo, Domon and another prisoner, Bardman, successfully escaped using a stolen car. Argo's prison warden, Nastasha Zabigov, sent the Bolt Gundam after them. Rain caught up to Domon and sent the Core Lander to him, allowing him to summon the GF13-017NJ Shining Gundam. Just as Nastasha thought that Argo had fulfilled his mission of drawing out the Gundam, Argo told her not to interfere, revealing that he orchestrated the prison break in order to have a fair fight with Domon's Gundam. The Bolt Gundam's strength and durability proved to be a match for Shining Gundam, and the fight ended in a draw. 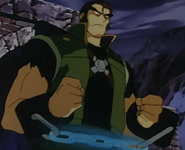