Argi is stated to have difficulty around women. He is driven to stay alive and find the Gundam that killed his family. He is not much of a thinker as he typically does what he's told but his compassion and loyalty for his comrades outgrows his past anger. Argi is also naive and often is oblivious to a problem unless it is made obvious to him by someone else. He feels he has a life debt to pay and is willing to do anything to pay that debt. He has said he needs the Astaroth in order to have his revenge. He is quick to respond as well and has sharp instincts.

Through his right prosthetic arm, he can form a neural link with the Astaroth, although this does not give him maneuverability comparable to something like the Alaya-Vijnana System.

Some time before P.D. 323, Argi was involved in an attack by a Gundam Frame on a civilian craft. As a result his entire family was killed and he was the only survivor of the attack, although losing his right arm. Eventually becoming a mercenary for hire, he accepted a contract killing job (stated as his first) to kill Daddy Ted. When a mobile suit attacks Daddy Ted's home, he instead opts to defend Daddy Ted, and becomes the pilot of the ASW-G-29 Gundam Astaroth to fight off the mobile suit. The pilot however commits suicide soon after his defeat.

Argi shows a concern for Volco and his health. Argi sympathizes with Volco and is willing to assist in Volco's mission to retrieve the Astaroth's original armor. Argi works together with Volco in order to protect Liarina.

Argi and Liarina don't have the best of relationships as she partially blames Argi for her fathers death, but she does trust him. On the other hand Argi feels reponsible for his father's death. Argi once attempted to apologize to Liarina but she slapped him.

A human debris, Sampo and Argi first met on the battlefield. After that battle the two met and teamed up together to save Liarina and Volco from Rosario Leone in order to benefit their intentions.

Assigned to kill Ted Morugaton or Daddy Ted as his first hit. Instead of killing him, Argi was saved by Daddy Ted. Shortly after, he died leaving Argi feeling responsible. Argi, together with Volco, vowed to protect his daughter Liarina. 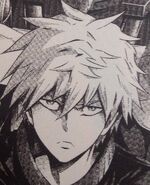 Retrieved from "https://gundam.fandom.com/wiki/Argi_Mirage?oldid=476903"
Community content is available under CC-BY-SA unless otherwise noted.