The Argama-Class Assault Carrier was developed in secret at the Sweetwater colony by Anaheim Electronics with funding from the Anti Earth Union Group. The Argama class was inspired by the successful Pegasus-class assault carrier White Base, from the One Year War. Instead of having a central centrifuge that would rotate to simulate gravity, the Argama has two rotating residential modules that can extend from the sides and rotate to simulate gravity for the crew. These modules are retracted when combat operations begin. The bridge of the Argama-class ships also feature a retractable design, providing the crew there with more protection during combat.

The Argama have four single barreled beam cannons, one before the bridge, one after the bridge and two on the underside of the ship.

The Argama is equipped with multiple missile launchers that are used to launch anti-mobile suit and anti-ship missiles.

Originally, the Argama is not equipped with any anti-air laser guns, but these weapons were added during the second refit. These defensive guns are retractable, with at least four mounted on the sides of each launch deck.

The Argama is fitted with the Minovsky Craft System prior to its descent to Earth during the First Neo Zeon War. A lift-generating system in use since the One Year War, it allows a vehicle to resist the pull of Earth's gravity. It is not installed on a standard mobile suit due to its power requirements and size. When Minovsky particles are released into the air, the positive and negative particles spontaneously align themselves into a three-dimensional cubic lattice. Because of the repulsive and electrostatic forces between the particles, this lattice resists compression, and the Minovsky Craft System uses this phenomenon to push the underside of the vessel away from the planet's surface. This allows the equipped vehicle to float over Earth's surface.

The Argama-class is capable of utilizing a ballute atmospheric re-entry system, in which an inflatable device is deployed from the back of the ship and allows heat and friction to be dispersed around and away from the ship, allowing for a safe entry into Earth's atmosphere.

The Argama-class can equip a supplemental rocket booster system to obtain sufficient thrust to help it overcome Earth's gravity and leave the atmosphere.

The most famous of the Argama-class assault carriers was the Argama itself, which served as the flagship of the AEUG fleet during the Gryps Conflict. Originally captained by Henken Bekkener it was soon placed under the command of Bright Noa, who remained its captain till after the Gryps Conflict. Entering service on March UC 0087, the first mission for the Argama under Henken Bekkener's command was to capture one of the new Gundams being developed by the Titans at a base on Green Noa I.

Following the rescue of Bright Noa and his ship, the Temptation, the former White Base commander is given command of the Argama and remains its captain long after the Gryps Conflict and into the First Neo Zeon War. It was upgraded with the Hyper Mega Particle Cannon in the latter stages of the War, but after the Colony Drop of Dublin, the crew was forced to abandon it on Earth so Karaba could repair and use it. It was replaced by the Nahel Argama for the last stages of the War.

The second ship of the Argama-class to be developed, the Pegasus III was named in honor of the Pegasus-class assault carriers. The Pegasus III had several changes to its design, such as the residential modules are fixed into place and the radar antennas on the side of the bridge were replaced with those that resemble the Pegasus class ships of the One Year War.

Commanded by Eton Heathrow, the Pegasus III was launched from the Baikonur space base on February 25, UC 0088 as part of Task Force Alpha. Their mission was the suppress the New Desides during the Pezun Rebellion.

Another Argama-class appears in MSV-R:The Return of Johnny Ridden. It intervened during the fight over the Sangre Azul in Jaburo, where it appeared in low earth orbit and descended to Earth. It launched Doms with special equipment to destroy Themis' Ram Z'Goks, then dropped depth charges to lure enemies to the surface, after which its forces proceeded to destroy any units that surfaced. The entry of the Nikaya into this battle wiped out the underwater Themis MS, and saved the allied submarine fleet. It later launched into space to pursue the Sangre Azul. 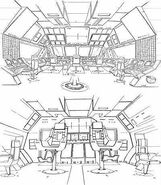 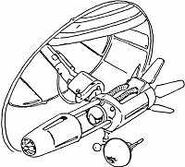 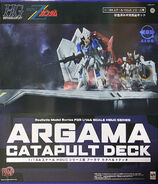